Smaller, cheaper SUVs and SUV crossovers may be more economical, but the Skoda Kodiaq is a true family wagon with affordable running costs. 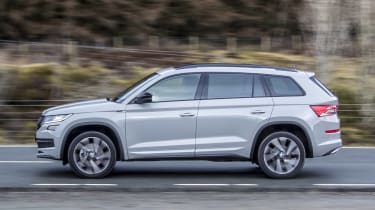 Not long ago, if you wanted a large SUV with seven seats like the Skoda Kodiaq, you’d have to face punchy fuel bills. Not so now, as the Kodiaq makes use of the latest efficient engine technology and fuel-saving measures. This means it can return well over 40mpg and won’t cost the earth to tax – despite having seven seats and weighing up to 2.5 tonnes.

The 148bhp diesel officially returns around 50mpg and emits under 150g/km of CO2 with front-wheel drive, an automatic gearbox and seven seats, and the lighter five-seat SE model will be very slightly more efficient. With four-wheel drive this drops to 45mpg (155g/km). The recently updated 197bhp diesel engine gets four-wheel drive as standard, and manages 42mpg and 175g/km. It’s also only offered on the top three trim levels, so isn’t a cheap option.

If you’re looking at a Kodiaq with the 148bhp 1.5-litre petrol engine, it’s worth noting that it comes with Skoda’s ‘active-cylinder technology’ (ACT), which shuts down two of its four cylinders during gentle cruising to save fuel. This helps it return around 40mpg with CO2 emissions from 150g/km. 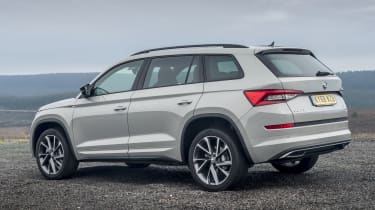 All the diesel engines, meanwhile, use ‘selective catalytic reduction’ (SCR) to reduce harmful emissions. This means high-mileage drivers may need to top up with AdBlue between services. Most modern diesel engines now use this system; you can read more about AdBlue in our advice article on the subject.

We’d generally caution against specifying four-wheel drive unless you really need it. The Kodiaq should be competent over moderately rough terrain and the four-wheel-drive system is effective, but it costs about £2,000 and dents fuel economy.

The Kodiaq is pretty affordable to insure, sitting in groups 15-29 out of 50, making it slightly more affordable than the smaller Volkswagen Tiguan.

You can choose to maintain the Kodiaq based on fixed or variable servicing schedules, depending on the sort of journeys you do. If you’re going down the fixed route (recommended for those who drive hard, fast or take lots of short journeys), expect to book the Kodiaq in every year or 10,000 miles. Skoda typically charges around £300 for two years’ worth of maintenance via its service plan.

Skoda’s three-year warranty is decent if unexceptional. There’s no mileage cap for the first two years, while the third year has a 60,000-mile limit. Extended warranties will be available to purchase, should you want extra reassurance.