Excellent build quality, ergonomics and a well judged dashboard design all feature in the Skoda Kodiaq

The Skoda Kodiaq doesn’t have a revolutionary interior design, but it’s aesthetically pleasing and has enough unique features to mark it as different from the Nissan X-Trail and Volkswagen Tiguan Allspace, for example. Its greatest strong points are the way it’s put together, the materials it’s built from and how comfortable and relaxing it is to travel in and we particularly like the suede-style seats in the Sportline model.

We were very impressed by the way very little road noise breaks the tranquillity of the Kodiaq’s passenger compartment, while the engines are also impressively hushed. At high speeds you can hear the wind as it passes the windscreen and mirrors, but this is something that afflicts most of the car’s SUV rivals.

The Kodiaq’s ride quality also impresses. Even on big 19-inch alloy wheels, we found it able to absorb the bumps of uneven road surfaces, and entry-level cars on smaller wheels prove even more comfortable. 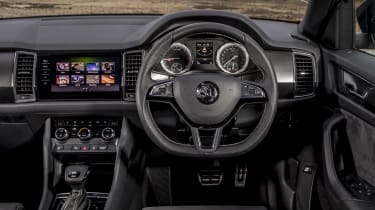 If a car’s headlights contribute to its exterior ‘face’, its air vents do the same for the dashboard. The Kodiaq’s vertical air vents are bold and unconventional in their portrait-orientation, curving downwards as they follow a delineation in the dashboard.

Squint hard enough through the memory banks and photos and you’ll see enough geometrically distinctive details in the Kodiaq to remind you of Skodas from many moons ago. It’s nice to see a carmaker carry such heritage through the years, although it must be said the Kodiaq’s build quality is unquestionably strong. The glass-fronted eight-inch infotainment touchscreen for example, looks genuinely swish, and the materials used throughout the interior are of high quality.

Look closely and it’s possible to find areas of – if not cost-cutting – evidence of Skoda’s status within the Volkswagen Group. While the Audi Q5 features digital readouts for the climate control neatly integrated in the dials themselves, in the Kodiaq (and the VW Tiguan, for what it’s worth), the displays are separate, less elegant affairs above the dials. From the point of view of functionality, the systems are pretty much identical, but it’s these little design touches that draw many to brands such as Audi. Considering the Q5 range starts at about £15,000 more than the Kodiaq, though, such matters are mere trifles.

The SE trim is fitted with features like dual-zone air-conditioning, 18-inch alloy wheels, cruise control, rear parking sensors, automatic lights and wipers, a couple of storage nets for the boot and a pair of umbrellas hidden in the front doors. It comes with five seats as standard but you can upgrade to seven seats for additional cost.

Both SE Drive and SE L models of the Kodiaq come with Skoda’s ‘Infotainment Online’ system, which features a wi-fi hotspot and real-time updates for the sat nav, as well as overlays for route guidance from Google Earth and Google Street View.

SE L trim is up next, and is our pick of the range. This includes seven seats clad in Alcantara suede fabric, 19-inch alloy wheels and gets you LED headlights, as well as a power-opening boot. It also adds heated front seats, the full KESSY system (which includes keyless entry as well as keyless go) and the Driving Mode Select system.

The SportLine model sits between the SE L and Edition in terms of standard equipment and comes with a sports styling pack that includes 20-inch alloy wheels, bigger bumpers and black versions of the grille, roof rails, door mirrors and side window trims. Inside, there’s a leather steering wheel, carbon-effect dashboard and door inserts, plus Alcantara-trimmed sports bucket seats and door panels.

Spend a further £2,000 or so and you get the Kodiaq in Edition guise. In addition to the features listed above, this packs a 9.2-inch touchscreen Columbus sat nav, leather seats (power-adjustable in the front), chrome roof rails, wireless phone charging and a colour trip computer. Edition trim also brings some extra safety equipment, with a lane-departure warning system, auto-dipping headlights and a blind-spot monitoring system all featuring. The flagship L&K trim adds luxuries like a panoramic sunroof, chrome grille, ambient interior lighting and leather seats, along with convenience items like a bird's eye parking view and heated windscreen. Both the Edition and L&K trims push the Kodiaq's price up substantially however, and we'd argue the SE L feels almost as plush and is better value.

If the standard Kodiaq doesn't quite look tough enough for you, the Scout adds a bit more off-road beef to the crisply styled SUV. It wears a unique style of 19-inch alloy wheels, as well as a more muscular look to the front and rear bumpers. There's a modest 6mm increase in ride height, while a standard four-wheel-drive system and underbody protection provide the trousers to back up its all-terrain talk.

However, the Scout's interior upgrades mark it out as more of a lifestyle and image package than one dedicated to serious off-road adventure. It builds on the specification of the SE L, adding prominent Scout emblems on the dashboards and seats, the latter of which are clad in Alcantara suede, which also adorns the door panels. You'll also find decorative wood trim inserts and an LED ambient interior lighting package.

All told, it's an attractive package, but an expensive one. If you love the look, then go for it, but if you just need four-wheel drive, we recommend choosing an SE or SE L and adding it as an optional extra – you'll save thousands. 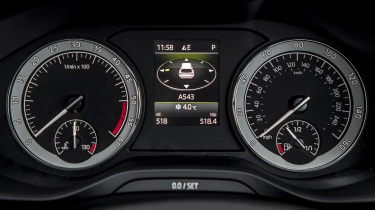 Many will want to specify metallic paint, which is only standard with top trim levels; Skoda tends to charge around £600 for this extra. It’s probably a good idea to go for the heated windscreen, too (costing around £350) for those frosty, misty morning starts. Another feature that could make the Kodiaq even better to live with is Skoda's Virtual Cockpit - a digital instrument cluster that can show everything from sat-nav maps to what music you're listening to.

The ‘Virtual Pedal’ is also worth having from the point of view of convenience; this is Skoda’s name for hands-free boot opening, which is activated by waving your foot under the back bumper.

If you plan on testing the Kodiaq’s off-road credentials, order the optional off-road setting for the Driving Mode Select system. This is available with all 4x4 Kodiaqs and adds useful extras like a hill-descent mechanism. You can also add adjustable suspension – called DCC – to the Kodiaq. This helps make the on-road driving experience even better (it also works in conjunction with Driving Mode Select), but it adds almost £1,000 to the price.

The rough-road package (standard on the Scout) costs £300 and consists of engine and underbody stone guards.