Not particularly exciting, but the Scala is reasonably good to drive 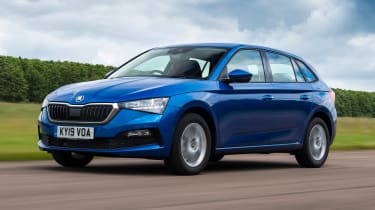 If you have a real passion for driving, the Skoda Scala’s driving experience and performance may not excite you. You might want to overlook it for a car with more precise handling, such as the Ford Focus, SEAT Leon or Honda Civic. However, that shouldn’t mean the Scala should be dismissed entirely; we expect that most people will enjoy its composed drive and its accurate steering, despite a relative lack of feel.

The six-speed manual gearbox is pleasant to use, with slick changes and a short-ish action. You won’t find it an effort or a chore to change gear, but a seven-speed dual-clutch DSG automatic gearbox is also available for extra cost. We didn’t find it to be as impressive as the same gearbox in the Volkswagen Golf, perhaps suggesting it has been configured differently. Unless you need an automatic, we’d recommend sticking with the manual gearbox.

While the Scala won’t necessarily provide excitement, everything works as it should and the driving experience feels mature and secure. It’s certainly not the worst-driving hatchback, by any stretch of the imagination, and will be fine for most buyers.

Two petrol engines are available for the Scala, and they’re expected to account for the majority of sales. The entry-level three-cylinder 1.0-litre turbocharged engine produces 94bhp and a more powerful version produces 108bhp. There’s also a 1.5-litre four-cylinder engine with 148bhp that manages 0-62mph in 8.2 seconds, while the 108bhp version of the 1.0-litre manages the sprint in a reasonable 10.1 seconds when equipped with a six-speed manual gearbox. This is our favourite Scala engine for now, feeling plenty quick enough in the middle of the rev range.

The 94bhp entry-level turbocharged 1.0-litre engine is the only unit available with a five-speed manual gearbox. With only 94bhp, it records the slowest 0-62mph time of the range taking 11 seconds. All other petrol engines come with a six-speed manual gearbox or a seven-speed DSG automatic gearbox.

At launch, the Scala was available with a 1.6-litre diesel engine producing 113bhp. This engine was discontinued in late 2020. 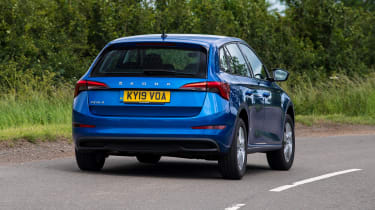 No hybrid model is available from launch, but Skoda is aiming to electrify most of its line-up in the next few years. We’ve heard that a faster vRS model is in the pipeline, and this is highly likely to use a petrol engine and an electric motor - boosting both performance and efficiency.