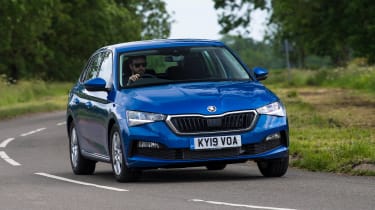 For many people, running costs are especially important when choosing a new car, and the Skoda Scala performs very well in this regard. It wouldn’t be unfair to say that many Skoda buyers prioritise efficiency over outright performance, which is echoed in the familiar engine lineup. The Scala’s very light, too, which helps with fuel costs.

Skoda is perceived as the value arm of the VW Group thanks to its low prices, respectable equipment levels and low running costs. This continues with the Scala: insurance groups are lower than the Volkswagen Golf, while increasing the standard warranty isn’t as expensive as you might expect. Skoda servicing tends to be reasonable, too.

The 1.0-litre should prove economical enough for most low- to medium-mileage drivers, with the entry-level 94bhp version being the most efficient, returning economy of over 53mpg when equipped with a manual gearbox. If you choose the 1.5-litre petrol engine with a DSG automatic, fuel-efficiency drops to 48.9mpg, As is often the case, choosing bigger wheels and some of the options will reduce the car’s efficiency.

The larger 1.5-litre petrol engine produces 148bhp and is capable of 51.4mpg with a manual gearbox, and up to 48.9mpg with a DSG automatic. Emissions for the Scala range from 119g/km to 131g/km, putting every model in the higher BiK bands for company-car drivers.

Skoda discontinued the diesel version of Scala towards the end of 2020.

The Scala does well on the safety front, which helps keep its insurance groups reasonably low. Lane-keep assist and front assist are both fitted as standard, and you can specify extras like blind-spot monitoring and rear traffic alert. The 94bhp engine offers the cheapest insurance sitting in group 10 (out of 50), while the 108bhp version occupies groups 13-14. Even the 148bhp engine won’t be too costly in groups 18-19. Skoda Octavias with the same engines range from groups 12-20. 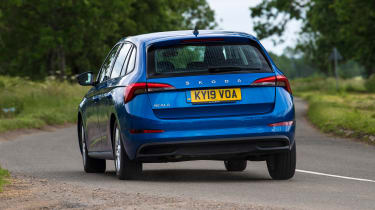 The Scala benefits from the same warranty as other Skoda models. Any mechanical faults are covered for three years, with unlimited mileage for the first two years and up to 60,000 miles in the third year. You can pay extra to increase the warranty for up to five years or 100,000 miles, and it’s not too expensive to do so, costing just over £500.

Skoda offers fixed-price servicing for all its models, so you can expect to pay £169 for an interim service and £279 for a major service. An MOT - needed when the car turns three years old - currently costs £39, while an oil and filter change costs £99. A fixed plan covering the first two services costs £342 up front, or you can spread the cost with monthly payments.