The old Smart ForFour had no design relationship whatsoever with the original ForTwo. This time around the two cars are closely related, with the ForTwo being essentially a shorter version of the ForFour, with the extra length accommodating a pair or rear seats and doors. However, it still can't match the interior space or luggage capacity of the Volkswagen up! or the Hyundai i10. 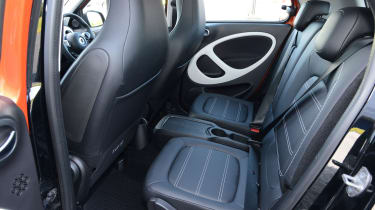 A six-foot adult should be able to fit comfortably in the front of the Smart ForFour, and getting in the back is easy, too, thanks to the wide-opening rear doors. However, in common with all small city cars, put a six-footer behind a tall driver and things get tight. Certain rivals have slightly less limited rear leg and headroom, but these cars take up rather more space on the road than the ForFour.

There's some scope to adjust the rear seats, but this feature is primarily designed to increase boot space rather than make the back-seat passengers more comfortable. The rear seat squabs can also be folded into the floor to make carrying taller items easier.

The door bins and glovebox in the Smart ForFour aren't very spacious – only a small water bottle will fit in either – but there's also a handy storage bin beneath the centre console, which pulls out and should handle a one-litre bottle of water.

The Smart ForFour has a boot capacity of 185 litres, lagging behind those of the Volkswagen up! (251 litres) and Hyundai i10 (252 litres). However, the rear seats can be locked at a right angle to leave a useful rectangular load bay, plus there's a large boot opening and no boot lip. Boot size for the more powerful Brabus ForFour is quoted as the same as the standard car, but buyers should be aware that the JBL subwoofer for the stereo does seem to eat into boot space and is an awkward shape. 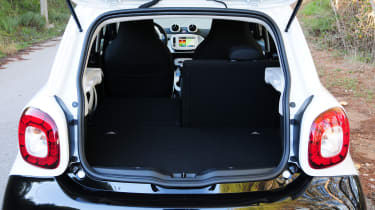 The rear seats split 50:50 and when they’re folded down there's a maximum luggage capacity of 975 litres, which is more than the Volkswagen up! can muster. The front passenger seat also folds forward to facilitate carrying longer items.