Should be very safe, but Smart ForFour reliability has been poor in the past

Smart's affiliation to Mercedes means you'd expect strong reliability from the ForFour, but that hasn't been borne out by past Driver Power owner satisfaction surveys. Smart will be hoping the new line-up sparks a turnaround in the company's fortunes.

There's never been any doubt about Smart safety, – the old Smart ForTwo was remarkably sturdy for its size. That's in part due to the car's rear-engined design, which leaves the front to act as a huge energy-absorbing crumple zone, while the Tridion safety cell keeps all occupants safe. Smart has already crash-tested the Smart ForTwo (effectively a shorter ForFour) and it fared very well in a head-on collision with a much larger Mercedes S-Class (below).

Smart didn't feature in our Driver Power 2017 survey, but it had the dubious honour of picking up the wooden spoon out of 32 manufacturers in our 2013 survey. The company finished second for fuel economy, but was heavily criticised by owners in all other areas, including ride quality, ease of driving and practicality. 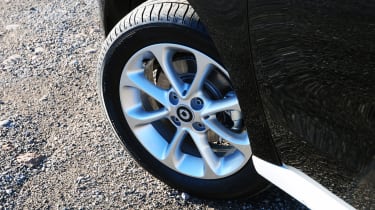 Safety body Euro NCAP crash-tested the ForFour in 2014, awarding four stars out of a possible five. Its adult occupant protection was rated at 78%, child protection at 77%, pedestrian protection at 65% and safety assist at 56%.

The car boasts clever body construction that makes it excellent at absorbing the forces of an impact. This latest model improves on the old car with the latest generation of electronic stability control (which stops the car spinning on slippery roads) and a raft of other features, including an optional forward-collision warning system, which can sense an imminent impact and warn you to take emergency action, plus optional lane-keeping assistance. Crosswind assistance (which prevents the car being buffeted by strong gusts of wind) is another welcome feature.