Very low running costs, but the Smart ForFour is relatively pricey to buy

All Smart ForFour models cost £140 a year to tax after an initial CO2-weighted payment in the first year that’s usually rolled into the on-the-road price; all engines fall into the 113-123g/km CO2 range. Benefit-in-Kind (BiK) rates should be 23 or 24% for company-car drivers, depending which engine is fitted.

The Smart’s reasonable emissions figures are in part thanks to clever technology that gets the engine up to its optimal operating temperature quicker. All models also come with a stop-start system, which switches the engine off at traffic lights (or any other time when the car is at a standstill) to save fuel.

Fuel costs will be low whichever model you choose, with the range-topping 89bhp engine and automatic gearbox returning 54.3mpg, the same figure as the 1.0-litre 70bhp model. The manual 0.9-litre can return 52.3mpg. This all comes at a cost, though – the Smart ForFour is roughly £2,000 more than an identically equipped Hyundai i10. 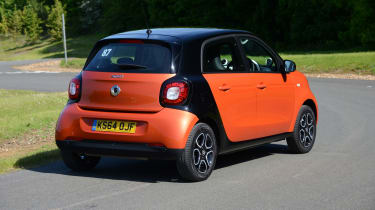 Most Smart ForFours fall into insurance groups one to nine, so they should be cheap to insure. You'll pay more to insure the higher models in the range with their extra equipment, but costs should still be manageable.

The Smart ForFour's three-year warranty is average for a city car, although the unlimited mileage puts it one step ahead of most. Even so, the Hyundai i10 has a five-year warranty, while the Kia Picanto comes with seven years' cover.

You can buy a three-year servicing pack from Smart for £20 a month, which works out at a total of £720. This isn't as cheap as servicing for the mechanically identical Renault Twingo.