Superb in the city, the Smart ForFour quickly feels out its depth at higher speeds

The Smart ForFour has been built specifically for driving in town and this is evident the minute you get behind the wheel. It has a very small turning circle of just 8.65 metres, which almost matches that of the famously tight-turning London taxi, while the Smart's small body means it's arguably even better than a black cab on busy city streets. Smart has also given the car its Direct-Steer system. This is a form of variable-ratio steering, which means you don't have to turn the wheel as much at low speeds. At higher speeds, it increases stability.

Smart apparently took inspiration from the previous generation Mercedes C-Class when it designed the rear suspension of the ForFour. The resulting ride is far more comfortable than in the old model, coping much better with typical road-surface changes, potholes and bumps around town.

The ForFour can be fitted with sports suspension (standard on the Prime Sport) that drops the car by 10mm, stiffens up the springs and adds larger 16-inch alloy wheels. 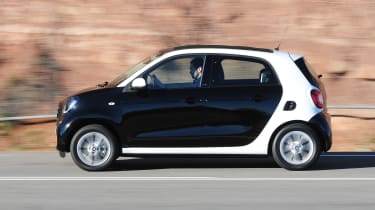 Smart makes it clear that the ForFour was set up with comfort and safety, not sportiness, in mind. That's immediately evident when you venture out of the city, where its abilities are limited by light steering and a relative lack of grip when taking corners quickly. But it was never really intended for that kind of driving and extra sound deadening means it's slightly quieter at cruising speeds than its Renault Twingo sister model.

We've driven both the 89bhp 0.9-litre model and the basic 70bhp 1.0-litre ForFour. Both models are available with a five-speed manual or a six-speed automatic gearbox.

Choose the 1.0-litre, 71bhp model and it'll take a leisurely 15.9 seconds to accelerate from 0-62mph, or a full second longer if you specify the automatic. This sluggishness can make the car feel vulnerable when trying to overtake slower traffic, so we recommend the manual, which is light and easy to use. That's a good thing, because the small engine needs lots of gear changes to ensure the Forfour makes steady progress on winding roads or hills.

If you can stretch to the extra outlay, the 90bhp 0.9-litre engine is well worth it. Its 0-62mph time of 11.2 seconds (11.9 if you choose the automatic) makes it a better, more relaxed and enjoyable companion on motorway jaunts.