"The SsangYong Tivoli XLV takes the stylish Tivoli and makes it bigger. It looks a bit more awkward&nbsp;than before, but it’s also more practical"

When the compact SsangYong Tivoli was released, it was by far the most stylish car we'd seen from the South Korean manufacturer. It was soon followed by the larger Tivoli XLV, a car rather more in line with SsangYong’s usual speciality of big, utilitarian four-wheel-drive vehicles. Developed on an all-new platform, the Tivoli has been well received, with over 64,000 built, some of which may have gone to customers persuaded away from rivals like the Nissan Juke, Renault Captur and Peugeot 2008. The XLV adds further appeal to the Tivoli by extending it at the back. You could call it an 'SUV estate'. 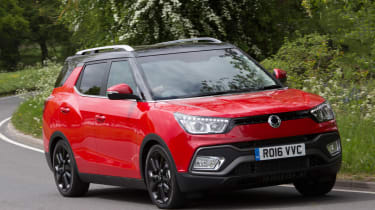 All models of Tivoli exhibit rather more design flair than SsangYongs of old, and although the extra bulk of the XLV is rather difficult to disguise, we reckon it just about manages to stay on the 'characterful' side of ugly. While not the most elegant car in history, the XLV adds extra functionality without ruining the likeable styling of the Tivoli.

The Tivoli has one key feature that hasn't been lost to this expansion – a low price. The XLV will only cost about £1,000 more than its smaller sister, which, when you take into the account all the standard equipment you get, is pretty good value. Much of what the Tivoli XLV offers is unchanged from the regular Tivoli, so it's an easy and unthreatening car to drive and never feels uncomfortably bulky from behind the wheel.

The 1.6-litre petrol engine from the regular Tivoli is available only in ELX specification and with front-wheel drive in the XLV, but the 1.6-litre diesel engine is our favourite in the range. Although it feels a little coarser than some rival diesels, it has plenty of power and fuel economy is reasonable, too – although the optional automatic gearbox and four-wheel drive negatively affect efficiency.

Because the Tivoli XLV has the same wheelbase as the regular model, the car's surprising off-road ability can also be experienced in the bigger machine. The same switchable four-wheel-drive system is available, with the drive usually being sent to just the front wheels and the rears being engaged only when extra grip is required. Off-road agility is good, although that extra rear overhang will affect just how steep an incline you can tackle. 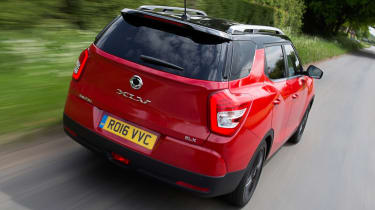 The Tivoli XLV is at its most economical in two-wheel-drive form with a manual gearbox, but the four-wheel-drive option rather suits the nature of the car. Many vehicles in this class don’t even offer it as an extra – the Peugeot 2008 and Renault Captur are strictly two-wheel drive, for example.

When you look at the XLV’s generous equipment list, it’s clear that value for money was one of SsangYong’s main intentions and the company also offers a seven-year/150,000-mile warranty to comfort those wary of moving to an unfamiliar brand. Autonomous emergency braking is now fitted as standard, which is good news as it increased the Tivoli XLV's Euro NCAP score from three to four stars.

And while the Tivoli XLV is outclassed by rivals for smoothness and quietness, it does have plenty of cabin space, a modern, interesting design and an enjoyable enough driving experience. What’s more, no rival offers the same combination of load-carrying practicality and off-road capability for such a low price.

If you have an active family and are looking for a rugged vehicle to use for holidays and chores alike, the Tivoli XLV will calmly perform in conditions that would leave certain rivals struggling.