The Tivoli XLV takes an already-practical design and expands it for further versatility. With most of the Tivoli’s structure unchanged, the XLV is extended behind the rear wheels by an extra 245mm. The result is one of the most capable load-carriers on the market.

We rated the regular Tivoli as being something of a Tardis: it offers a lot more interior room than the supermini-sized space it occupies on the road would suggest. There's cabin space for up to five adults and the seats are mounted high, which means good visibility. The doors also open wide, making access easy.

The XLV takes the same formula and builds on it. It offers enough space inside to allow a six-foot-tall passenger to sit behind a driver of the same height in reasonable comfort. It has more space than most vehicles in its class and should certainly be considered a front-runner if the back seats are likely to be in regular use.

None of the extra length of the XLV is given to increasing rear-seat legroom, and we think it's a bit of a shame that SsangYong didn't build in seat adjustment to allow this at the expense of load space – which, as you’ll see, is more than sufficient.

Meanwhile, the cabin has plenty of storage spaces. The doors have deep oddments pockets and there are more to be found in the centre console. The glovebox is well-sized, too, while the ISOFIX child-seat mounts on the rear seats are easy to access. 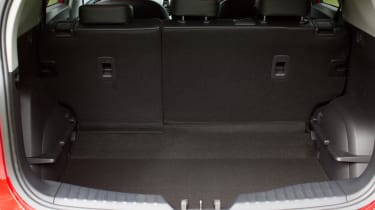 The area behind the back seats really defines the Tivoli XLV as a utility vehicle par excellence. Going beyond the already-respectable 423-litre boot space of the standard Tivoli, the 245mm body extension sees the XLV's luggage space stretching to an enormous 720 litres when the rear seats are in use - although this is measured to the roof rather than the parcel shelf and depends whether you are carrying a spare wheel inside the car.

If the seats aren’t needed, they can fold down to enable the XLV to swallow up to 1,440 litres of cargo. That’s a far larger load space than you get in a Peugeot 2008 or Renault Captur.

For even greater versatility, the XLV has smart-looking roof rails fitted as standard, so outsize loads can be lashed to the roof given appropriate fixings. All of these benefits give the Tivoli among the very best practicality-per-pound ratios on the market today.