With even the normal Tivoli being relatively new on the market, there hasn’t yet been enough information gathered on that model, let alone the new XLV, to make a worthwhile forecast of reliability

SsangYong has a relatively small – though growing – presence in the UK market so far and has sold relatively few cars, limiting the number of owners able to participate in our yearly Driver Power satisfaction survey.

However, the Tivoli is key to an expansion for SsangYong in the UK. It has grown its dealer network to over 75 outlets in the UK and is expecting to sell a thousand examples of the normal Tivoli every year, so it or the XLV could well make an appearance in the survey in future.

Although we can’t make any assumptions about reliability, the very generous warranty that SsangYong cars are covered by should provide plentiful reassurance to anybody concerned about buying from an unfamiliar marque.

It’s a seven-year/150,000-mile warranty, and unlike those of most rival companies, in the first year it also covers against the failure of certain wear-and-tear items such as brake pads and clutch plates. It should be seen as a good sign that SsangYong places great faith in the reliability and durability of its cars. 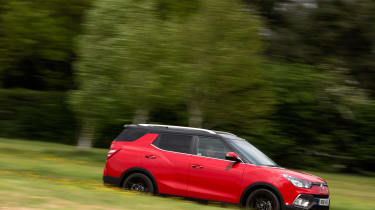 Over 71% of the regular Tivoli's bodyshell is made from high-strength steel, increasing rigidity and thus crash protection. Independent safety agency Euro NCAP now gives some cars two ratings: the first of these assesses the car in its standard guise, while the second applies once additional safety features are fitted.

Because the XLV only comes in the equivalent of the Tivoli’s range-topping ELX trim, the latest 2017 version now gets a host of safety technology as standard, and four stars from Euro NCAP instead of three for the basic Tivoli. This includes forward collision warning, with autonomous emergency braking to automatically hit the brakes if the driver doesn’t respond to an alert. The XLV should now be safer on the motorway too, thanks to lane departure warning and lane keep assist, while traffic-sign recognition helps identify speed limits. The headlights can switch between full and dipped beam automatically at night.