Plenty of power, but noisy and the ride sometimes gets uncomfortable

We found the regular Tivoli to be quite enjoyable to drive and the XLV takes after its sibling. This is all because the wheelbase hasn’t changed and the diesel engine has been carried over. It’s not the quietest in the world, but it’s willing to work hard and gets the job done.

The handling of the car isn’t too badly affected by the extra weight, either. The Tivoli XLV is composed and with responsive steering it changes direction in a safe, predictable fashion. If pushed too hard in corners, the body will begin to lean and the front tyres will run out of grip, but although it can get untidy, it’s never dangerous. Be aware of those limits and you can expect a drama-free journey.

The standard Tivoli was marked down a little for a somewhat harsh ride when roads are really bumpy. We were hoping that the extra 50kg of weight the XLV has put on would go some way towards addressing that, and it does actually feel a little more settled than its smaller sibling, dealing with typical UK potholes reasonably well. 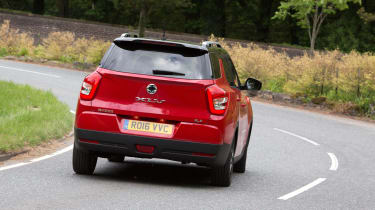 SsangYong offers the Tivoli XLV with the 1.6-litre four-cylinder diesel engine already seen in the regular Tivoli, but it’s available with two-wheel drive or a switchable 'intelligent' 4x4 system at extra cost. There's also a choice between manual and automatic gearboxes. If you want petrol power, you're restricted to two-wheel drive and the more expensive ELX specification, but you still have the choice of gearbox.

The diesel is a strong engine, featuring a turbocharger specifically intended to boost performance towards the low end of the rev range, and it does feel punchy when pulling away. It also picks up well from low speeds.

It's not at its best when pushed hard, though: when taken beyond its comfort zone, the diesel gets raucous without adding much in the way of extra speed. It works better if you shift up early and advance through the gears to reach cruising speed, where the clatter settles down and things feel more relaxed. The optional automatic gearbox changes gear quickly and reasonably smoothly. However, we still recommend the very good manual gearbox for its better fuel economy.

The four-wheel-drive system is also very capable and broadens the Tivoli XLV’s appeal as an all-terrain utility vehicle, but it further harms economy and does swell the purchase price. Front-wheel drive should be fine unless you regularly need to tackle difficult terrain.