Suzuki SX4 S-Cross is safe and should prove reliable

Over the years, Suzuki has earned a pretty good reputation for building reliable cars and the SX4 S-Cross achieved full marks when it was crash-tested, so we’d generally expect the car to provide dependable family transport should you choose to buy one.

The brand has also recorded a big improvement in recent editions of our annual Driver Power owner satisfaction survey. In 2016, it finished in 19th place out of 32 brands surveyed, with owners praising their cars for low running costs and rating them highly for driving ease.

Suzuki is one of the few Japanese manufacturers that hasn't had to issue a major product recall in the last couple of years. There are certainly more stylish and exciting rivals to look at in this class, but the S-Cross feels well put-together, both inside and out, and the materials and fit of the interior certainly look like they’ll stand up to the trials of family life more effectively than the cabins of rivals, such as the Vauxhall Mokka X.

The S-Cross didn’t disgrace itself in our 2016 Driver Power owner satisfaction survey, finishing in 61st place out of 150 cars analysed. Its reliability was regarded as no better than average, but in the areas of running costs and practicality it was given a very good 19th place rating, with a 27th place finish for handling and 28th place finish for seat comfort.

Rather less worthy of celebration was a 141st-place finish for performance, although we expect the new Boosterjet engines to largely rectify this shortfall. 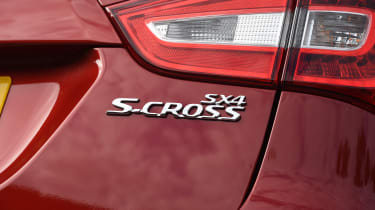 The Suzuki SX4 S-Cross was crash-tested by Euro NCAP in 2013 and received the maximum five-star safety rating. It scored well across the board, including a 92% rating for adult occupant protection and 80% for child occupant protection.

The SZ5 trim gets technology called Radar Brake Support, which constantly monitors the road ahead, warning the driver if it detects a collision risk and applying the brakes if an impact is unavoidable, to prevent or minimise its severity.