The Suzuki SX4 S-Cross is slightly shorter and narrower than the Nissan Qashqai and Kia Sportage, but it feels more spacious inside than many other crossovers in its price range and there’s plenty of space for a six-foot passenger to sit behind a similarly tall driver. There’s plenty of headroom, too, providing you avoid the panoramic roof that comes as standard on SZ5 models.

Suzuki has done a good job with the boot, though, so the S-Cross matches the Qashqai in this department. It’s only when you lie the seats flat that you notice the difference in boot size between the Suzuki and the other two.

Storage is an area where the S-Cross could do better and there isn’t a huge amount of space for adults in the back of the car, either. 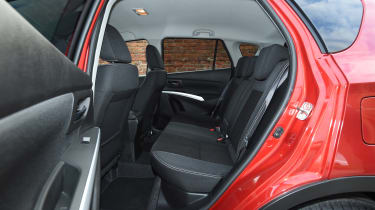 There’s plenty of room up front in the S-Cross, and while its installation causes problems for taller passengers in the back, the panoramic roof that comes as standard on the SZ5 model lets in a lot of light to help create a bright and airy atmosphere inside the car. This helps to partially mitigate the fact that the S-Cross is a slightly smaller car than its rivals.

The trouble with the sunroof is that it eats significantly into rear headroom, meaning you don’t have to be a particularly tall adult to find your head rubbing on the roof lining of the car if you’re sitting on the rear bench. The Suzuki’s relatively narrow dimensions also mean that space is tighter across the rear three seats and it’s more of a squeeze with all the seats occupied than it is in rivals.

Take a cursory glance around the cabin and there appears to be a lot of storage space in the S-Cross, but sadly not all of it is hugely useful. The door pockets are quite shallow and while you do get two cup-holders between the front seats and a reasonably sized glovebox, there are a fair few cubbies that aren’t much use for anything other than pretty small bits and bobs. 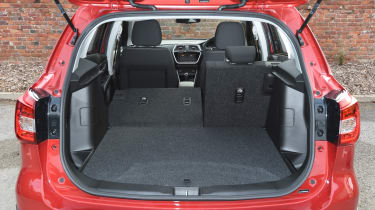 The way the S-Cross’ interior has been designed means there’s a useful 430-litre boot – by installing a seatback tilt feature as part of the car’s 2016 facelift, Suzuki has freed up an extra 10 litres. This can easily be extended to 875 litres by folding the rear seats down flat. By comparison, with their seats up, the Nissan Qashqai has 430 litres of boot space, the Kia Sportage 503 litres and the Skoda Yeti 416 litres. It’s only when you fold the seats down in the S-Cross’ main competitors that you really notice its smaller dimensions – its 875 litres are dwarfed by the 1,492 litres of the Sportage, the 1,585 litres of the Qashqai and the massive 1,760 litres offered by the Yeti.

It’s rather a shame that there aren’t any remote-release handles in the luggage area, but it is flat and there’s a wide, low loading lip for easy access when lifting heavy items in and out.

Elsewhere in the boot, you’ll find a number of handy shopping-bag hooks, a 12V power socket and a neat false floor that lifts to reveal hidden extra storage. There’s also a pair of lidded cubbies hidden behind the rear wheelarches.

All Suzuki SX4 S-Cross models can tow a maximum braked weight of up to 1,200kg.