The Suzuki SX4 S-Cross is good to drive, if noisy when accelerating

The raft of improvements made to the Suzuki SX4 S-Cross in 2016 did a lot to lift it as a driver’s car. We were surprised by how much fun the 110bhp 1.0-litre Boosterjet engine made the S-Cross to drive – a big improvement over the previous 1.6-litre.

Suzuki has also paid attention to the suspension, including raising the ride height slightly, mainly for cosmetic reasons. Whether it was intentional or not, though, the latest S-Cross feels better from behind the wheel than before: more nimble and with plenty of grip. And although body lean is noticeable, there’s a greater feeling of security thanks to a stiffer body than before.

While a Mazda CX-3 is a more composed and ultimately more polished performer than the Suzuki, the S-Cross is far from disgraced and easily outclasses the Kia Sportage. It’s suspension generally feels supple, although the ride can become unsettled by poor surfaces.

The four-wheel-drive SX4 S-Cross models have extra driving modes for dealing with different conditions, including a snow mode for treacherous winter days and an automatic mode to keep the car gripping in most conditions. However, it’d be unwise to think of the SX-4 S-Cross as a proper off-roader, as even the budget Dacia Duster is more capable at driving on uneven ground. 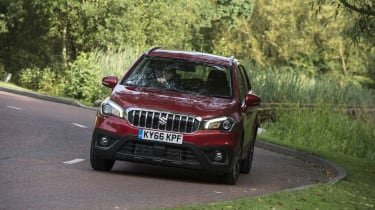 The smallest petrol engine for the S-Cross is a 110bhp 1.0-litre Boosterjet, which replaces the previous naturally-aspirated 1.6. It’s an engine we’ve tested before in the Suzuki Swift supermini and we reckon it's the pick of the S-Cross range.Thanks to the relatively light weight of the Suzuki, it feels quicker than its published acceleration figures of 11 seconds from 0-62mph suggests. While the SEAT Ateca can boast greater pulling power from its 1.0-litre engine, the Suzuki feels flexible and eager, while making a rather enjoyable noise. With decent economy into the bargain, the 1.0-litre looks a sensible – and good-value – choice for low-mileage drivers.

We’ve not yet tried the 1.4-litre Boosterjet, but with 148bhp and standard ALLGRIP four-wheel drive, it promises a sure-footed drive. A reasonable 10.2 seconds is claimed for 0-62mph, while a top speed of 124mph would suggest sustained high-speed cruising to be relatively effortless.

If you need an automatic, then the DCT gearbox is worth a look. While it's a bit jerky at low speeds, it shifts through the gears quickly and seamlessly when you're on the open road.