The Suzuki SX4 S-Cross is particularly economical when fitted with the 1.6-litre diesel engine

All Suzuki SX4 S-Cross models are economical, with the most frugal two-wheel drive models returning the best CO2 emissions and fuel consumption figures. The car is cheap to insure, too. It’s worth bearing in mind that when you come to sell the S-Cross on the secondhand market, you may find that it’s lost a greater proportion of its value than many of its rivals. 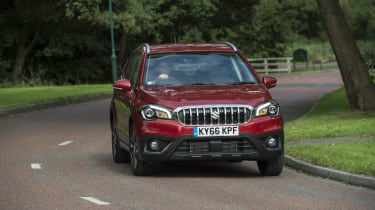 All versions of the S-Cross emit less than 130g/km of CO2 and every model comes with fuel-saving stop-start technology as standard, too. The most economical S-Cross is the 1.0-litre Boosterjet five-speed manual. In front-wheel-drive form, it’s capable of returning 56.5mpg and gives CO2 emissions of 113g/km. The ALLGRIP four-wheel-drive version has slightly inferior economy of 53.3mpg. Despite its mandatory ALLGRIP four-wheel-drive, the more powerful 1.4-litre isn’t far behind, at 50.4mpg, as well as increased emissions of 127g/km.

Insurance ratings for the updated SX4 S-Cross start with the 1.0-litre SZ4 in group 16, but moving to a higher trim level increases the group significantly to 21. The 1.4-litre sits in insurance group 24. A Skoda Yeti should be slightly cheaper to insure (groups 15 to 22) and the same goes for the Nissan Qashqai, which spans groups 13 to 19.

The S-Cross’ service intervals are closer together than those of cars like the Nissan Qashqai and Skoda Yeti. However, Suzuki does offer a service plan to spread the cost of routine maintenance, while it also offers fixed-price servicing that should make it easy to budget for maintenance.

Suzuki offers a three-year/60,000-mile warranty to its buyers, which matches the cover offered by its biggest rival in this class, Nissan. Compare this to a car like the Kia Sportage, though, and it looks a lot less competitive, as Kia offers a seven-year/100,000-mile warranty. Suzuki also includes one year of AA assistance in the UK and Europe in case you run into any difficulties on the road.