What's the law on towing with an A-frame?

Our guide breaks down the details of this specialised towing method 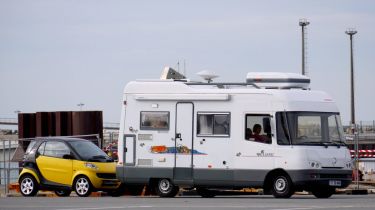 You’ve most likely seen a motorhome with a city car in tow, looking rather similar to the small dinghies sailors use to go ashore. For owners of big motorhomes, the principle is very similar – it’s far easier to have a car to drive around in once you’ve set up camp. This is especially true in seaside towns, where narrow lanes and tiny car parks are nigh-on impossible to negotiate in a camper van.

A-frames are used because they don’t require anyone to sit in the car while it’s being towed. In fact, A-frames were originally used by breakdown recovery drivers for that very reason. But what’s the law on towing with an A-frame if you don’t work for the AA – is any vehicle suitable and can anyone use one?

The law on towing with an A-frame

According to the government, when a vehicle is being towed using an A-frame, it effectively becomes a trailer, and is therefore viewed under the same legislation. Under these rules, the ‘trailer’ can have a mass of up to 750kg before requiring brakes. However, the rules also state that when a trailer is fitted with brakes, they must be functional. As virtually any car being towed with an A-frame will surpass 750kg and have brakes fitted, it essentially becomes mandatory that the brakes of the car being towed are functioning.

This can be achieved by fitting an A-frame using inertia (overrun) braking, similar to the setup used with many caravans, so long as the A-frame and car combined do not exceed 3,500kg. Alternatively, some manufacturers have designed A-frame systems that electrically operate the car’s braking system in unison with the braking of the tow vehicle. 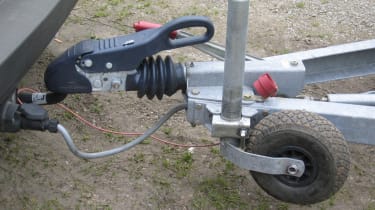 Just like when towing a trailer, the tow vehicle must also be able to supply the car connected by A-frame with electricity so its road lights function correctly, including its indicators and sidelights when it’s dark. While the car being towed will have its own number-plate fitted, this must be covered by the number plate of the tow vehicle when attached to the A-frame.

Driving-license requirements for towing with an A-frame

The weight of car you can tow using an A-frame is the same as your entitlement to tow a trailer, but includes the combined weight of the car and A-frame itself. In January 1997, the regulations for towing changed significantly for new drivers, becoming much more restrictive, with specific qualifications put in place for those wanting to drive heavier vehicles and tow heavier loads.

If you passed your test before 1 January 1997, the back of your driving licence should include the entitlements B, BE, C1 and C1E. Categories B and BE allow you to drive a vehicle weighing up to 3,500kg and tow a caravan or trailer of normal proportions.

Entitlements C1 and C1E permit driving a vehicle weighing up to 7,500kg and towing a trailer where the combined weight of both the tow vehicle and trailer does not exceed 8,250kg. The trailer also has to weigh less than the tow vehicle. The C1E entitlement should easily allow you to drive a motorhome and tow a small to medium sized vehicle on an A-frame.

If you passed after 1 January 1997, your licence will typically show that you have a category B entitlement, allowing you to drive a vehicle weighing up to 3,500kg. If you drive a vehicle of this weight you are permitted to tow a trailer of up to 750kg, while the trailer can weigh more than 750kg as long as the total weight of the tow vehicle and trailer combined does not exceed 3,500kg. While it may be possible for a hatchback, saloon car, estate or crossover to tow an A-frame and city car within this weight limit, it’s highly unlikely a motorhome and A-frame would weigh under 3,500kg.

Drivers who passed their test after 1997 can extend their entitlements to include BE, C1 and C1E by undertaking training and passing the relevant tests.

Driving abroad with an A-frame

While towing a car with an A-frame (with functioning brakes and lights) is generally understood to be legal in the UK, the situation in European countries is less clear-cut. In some countries, A-frames were only ever intended for recovering stricken vehicles, and using them to tow for leisure purposes falls in a grey area. For this reason, it’s necessary to ensure you comply with the law in each country you visit, and often the only way to be sure of this is to leave the A-frame at home and instead tow your vehicle on a small trailer instead.

Tips for driving with an A-frame

Small trailers can be notoriously difficult to maneuver when reversing and A-frames are possibly even trickier. If you’re new to towing, it’s always a good idea to head to an open, safe environment where you can practice before going on your first trip. A reversing camera can also be a fantastic asset when towing with a motorhome – particularly one with no rear windscreen.

Suitable vehicles to tow with an A-frame

The most popular vehicles converted to be towed with an A-frame include the Toyota Aygo (and closely related Citroen C1 and Peugeot 108), Smart ForTwo, Fiat 500, Mazda MX-5, Suzuki Swift and MINI hatchback. These are all well suited to the job thanks to their compact size and modest weight, while they’re fun to drive at the destination and cheap to run. Necessary modifications include fitting a metal fixing point to the car for the A-frame to attach to – these can typically be removed when not in use.

Unsuitable vehicles to tow with an A-frame

If you’re buying a vehicle specifically to tow with an A-frame, always discuss your planned purchase with A-frame suppliers first to check its compatibility and the cost of any necessary modifications. Some cars with traditional (torque converter) and CVT automatic gearboxes can’t be towed over long distances, while some automatic gearboxes (including most with a dual-clutch design) are safe to be towed in neutral.

Heavy or large vehicles, models with four-wheel drive and newer cars with very sophisticated electronics are considered less well suited to A-frame towing if they diminish the possible size of the tow vehicle or can be damaged by prolonged towing.

If you wish to learn more on towing in general, check out our article Towing: all you need to know for more information.