Why potholes cause damage and what you can do about them 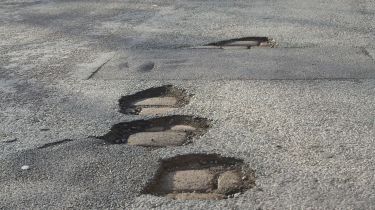 Many Carbuyer road tests mention how a car feels when it passes over a pothole. In very few cases, it might pass with only a gentle tremor from a car's suspension. But far more often, a great crash will shudder through the car and its occupants.

Although you might feel a pothole more abruptly in some cars than others, these big craters in the road surface have the potential to damage your car. The sudden shock of a wheel plunging into these holes can transmit considerable force into your tyre, wheel and suspension, as well as the structure of the car itself.

The fact that you can seek compensation for costs arising from a pothole impact is good news for motorists. However, it would be beneficial for everybody if our roads were free of this often-hidden menace, which can resemble an innocent puddle until it's too late.

Read on for advice on how to report a pothole, hints on claiming compensation and the lowdown on the process of how a pothole is dealt with by the authorities. But first, how do they actually occur?

What is a pothole?

Without getting bogged down in the fundamentals of road-building, most roads are laid in several layers, starting with compacted aggregate at the very bottom and topped with a smooth, hard-wearing surface dressing, with binder and base levels in between.

The surface is usually either laid in tarmacadam (a mixture of bitumen tar, sand and gravel) or concrete, and should be able to cope with appropriate densities of traffic without showing serious signs of wear and tear for many years if laid correctly.

However, as time passes, tiny imperfections in the material can weather and open up. As water gets into the gaps, it can freeze and expand or dry out as the temperature rises, and the resulting movement can weaken the area immediately surrounding the original defect. As the affected material breaks up, it's gradually displaced by passing traffic, and once much of the loose material has been thrown aside, a pothole is formed.

What damage can a pothole do?

The first part of your car to make contact with a pothole is its tyre, and since it's made from a softer material than other components, it's likely to take the brunt of the force. Fortunately, tyres are pretty tough and good-quality ones are designed with the punishment of road imperfections in mind. They're not indestructible, though, and a heavy impact can damage or even burst a tyre.

Tyres are filled with air and the air displaced in an impact has to go somewhere. This can result in a bulge forming in the tyre sidewall. In extreme cases, a pothole shock can result in a considerable distortion of the tyre's shape, which you'll be able to feel as a vibration as you drive. In this case, the tyre will need replacing.

However, if your tyre picks up a bulge, you've really been lucky. Far worse is for the tyre to blow out, if the sudden rise in air pressure is too much for it to stand. At the very least, this will cause you the inconvenience of struggling with a jack and spare wheel or waiting for recovery.

A car's suspension and steering are next in line to suffer from a pothole impact, with the tracking – the settings that keep the wheels pointing in the right direction – easily thrown out by such a sudden force. Fortunately, tracking is fairly cheap to readjust, but poor wheel alignment can point towards other problems, such as bent suspension components that need repair or replacement.

How to report a pothole

The procedure for reporting a pothole varies depending on where you are. Drivers in the UK are advised to visit a government web page dedicated to just this issue.

The website invites you to enter your postcode and will then take you to the website for the local authority for the roads in your area. From this point, the process varies depending on your location, but you'll usually be taken to the relevant page for reporting potholes. You should follow the instructions on screen.

Some local authorities, such as Highways Essex, give you multiple options and you can report various road issues, including flooding and faded signs. On the Essex site, clicking "potholes and road surface issues" takes you to a page of images, where you're invited to choose the pothole that most closely resembles the one you've discovered. If the pothole is deemed severe enough to warrant immediate action, you're provided with a telephone number or e-mail address to report it.

What will the local authority do?

The timescale in which local authorities deal with reports of potholes varies, but some offer a high degree of transparency about the process. For example, this is how Highways Essex outlines its stance on potholes:

"We carry out regular inspections of the roads, but also rely on the public reporting potholes to us. We inspect all reported potholes and risk-assess them to prioritise their repair. They will either be classed as urgent or will be put into a planned programme of works to ensure they're repaired as efficiently as possible. The assessment will take into account many issues, including the location of the pothole in the road and the type of vehicle that uses the road such as cars, motorbikes or pedal bikes."

Once a pothole has been inspected, it's marked with paint if a repair is deemed necessary. Highways Essex employs a colour-coding scheme, with orange or purple paint depending on its severity. The pothole is also given a priority status from 1-4. Priority 4 potholes are usually only repaired as part of the next programme of planned maintenance. However, a Priority 1 pothole on a heavily trafficked county route might be made safe within two hours of being reported, with a full repair performed within five working days.

Your local authority website should make it clear how it deals with potholes, and may also present information on road repair funding and maintenance programmes that are in progress or upcoming.

When you find the page, it should outline the process for claiming compensation. You're usually required to have reported the pothole beforehand – you'll be given an enquiry number after doing so and this will form the basis of your claim.

You may choose to appoint a representative to pursue a claim on your behalf, although it's normal for local authorities to treat all claims uniformly – the impetus of a solicitor is unlikely to accelerate the outcome of your claim.