How to tow a car

Knowing how to tow a car can get you out of a sticky spot. We explain how to master this tricky skill 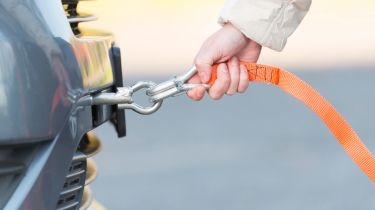 It is something that has happened to many of us; that sickening feeling when you know you’ve run out of fuel, or that fault you thought was fixed rears its ugly head and you break down in the middle of nowhere. It’s then you realise that your breakdown cover has expired, leaving you marooned. When a friend or family member then offers to tow you home, it feels like something of a godsend.

Well, it certainly can be, but only if the car is towed legally and in a manner that’s safe both for you and your car and other road users. It should also only ever be attempted over a short distance and as a last resort. You should also never tow on a motorway.

Best breakdown cover to choose in 2019

If, when you’ve read the following guide, you don’t feel confident about towing, it’s recommended that you contact a towing company. This may not be cheap, but most popular breakdown companies will arrange instant membership and arrange a recovery specialist immediately.

If you’ve never towed a car before, or even if you could use a refresher, the following guide covers the important factors that you should pay attention to when towing.

Towing a car: what you’ll need

Aside from a willing and trusted volunteer, you’ll need four important pieces of kit before you can tow your car.

A vehicle suitable for towing with. You can use common sense to determine the basic suitability of a tow car based on how big it is. You should never attempt to tow a car that’s significantly heavier than car doing the towing. Using a MINI to tow a Bentley will only end badly. The weight – and safe towing limit – will be published in the handbook for each car.A tow rope or towing bar. Some petrol stations keep these in stock, but most are bought from motoring suppliers like Halfords. The rope or bar will have a weight limit – make sure the car being towed doesn’t exceed this limit.Two towing ‘eyes’. These are the metal brackets that a tow-rope attaches to. On some older cars, they’re structural and found under the front or rear of the car, while more modern cars usually have a metallic ring that screws into a sockets at the front or rear of the vehicle. The ring will usually be found with the car’s tool kit or spare wheel.An ‘On Tow’ sign. Most tow ropes or bars will include one of these. It should be hung from the rear of the car where it’s clearly visible, to warn motorists following behind that you’ll be travelling slowly.

How to set up a car for towing

The tow rope or towing bar should only ever be attached to the official towing points for each car, the location of which will be given in the owner’s manual. If you find that the towing-eye attachments are missing for either car, do not attempt to attach the rope or bar elsewhere, as this could lead to significant damage or injury.

The mounting for the towing eyes is often concealed behind a plastic cover in the front or rear bumper and you may need a screwdriver to prise this open. Remove the covers and screw the towing eye securely into the socket, using a wheel brace or similar implement from the tool kit to tighten it.

Hang the ‘On Tow’ warning sign at the rear of the car being towed in a position where it’s clearly visible to following traffic.

Depending on whether you’re in the tow car or the car being towed, the cars will behave differently and both drivers should bear this in mind. Both drivers need to be aware that towing eyes, rather than being mounted along the centre-line of the car, are usually offset to the left or right. This has a big effect on how the car will steer and behave – especially when pulling away, but also once both cars are on the move.

The driver of the car being towed will need to make additional steering inputs to accurately follow the tow car. They’ll also find that the steering feels very different to usual.

For the driver of the lead car:

Arrange a set of signals in advance with the other driver to aid communication while on the move. If they have a problem or don’t feel comfortable, agree before you set off that repeated beeping of the horn means slow down and a long solid beep means you need to pull over, for example.

While tow bars are the safest method for towing a car, most people will use a tow rope, as these are significantly cheaper. If this is the case, one of the key things to avoid is pulling on the rope suddenly. This can cause uncomfortable jolts, which can snap the rope or damage one or both of the cars.

When moving off (both for the first time and from junctions or traffic lights), accelerate very, very gently until you feel the rope becoming taut. If your car has an automatic gearbox, use the ‘creep’ function (take your foot off the brake, but don’t press the accelerator) until you feel the rope tighten. Once it’s tight, move off gently and keep your speed below 15mph or so. Make sure there’s plenty of space when pulling out, as other road users may not immediately notice you’re towing another car.

When on the move, you’ll want to give plenty of warning for any manoeuvre you make; remember that tow ropes are only a few metres long, so the driver of the car being towed will have very little time to react. Indicate in plenty of time and when braking, press the brake pedal very gently to illuminate the brake lights before slowing progressively.

Take corners slowly, gently and wider than you would normally. If you take them too tightly, the tow rope or bar could pose a danger to pedestrians or cut across the verge.

For drivers being towed:

Take the handbrake off and make sure the gearbox is in neutral. You’ll also have to turn the ignition on so the steering wheel lock is off. If your car has four-wheel drive or an automatic gearbox, consult the handbook for the manufacturer’s advice on towing.

If the engine isn’t running, bear in mind that you’ll need to brake much harder than normal, as almost all cars use power from the engine to boost the brakes. Similarly, if your car is equipped with power steering (almost all modern cars are) this will also be inactive if the engine is shut off, so the steering will be much heavier than you’re used to.

Watch the lead car very closely. You’re going to be braking and steering according to what they’re doing. With only a few metres of rope between the two cars and no power assistance, reactions are key. If you’re using a tow bar, remember that these aren’t designed to act as a brake. If you’re using a rope, try to keep this tight at all times. If it becomes slack, very gentle braking can tighten it up again.

Although ultimate responsibility resides with the driver doing the towing, you have to co-ordinate your braking and steering with their movements.

Look out for brake lights and indicators coming on, and be prepared to act gently yet decisively. If you’re uncomfortable with being towed, use the prearranged signals so the lead car can pull over.

You also need to be aware that specific legal restrictions exist with regard to how heavy a load you can tow. While these vary depending on when you passed your driving test, the key thing to bear in mind is that there are exceptions for towing broken-down vehicles, but only to a place of safety. Towing a car is difficult, potentially dangerous and should only ever be done over short distances.

If it's time to get a new car, read our guide to 2019 scrappage schemes to see if your car could get you a big saving.