How to transfer car ownership

Buying or selling a used car? We explain how to legally transfer a car to its new owner 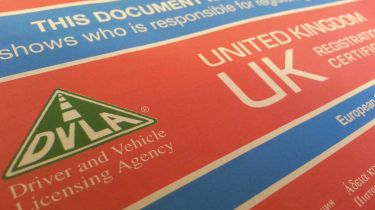 If you're selling a car, it's not enough to simply take the buyer's money and then hand over the keys. Although the new owner might be perfectly happy, they're not officially the new owner until the authorities have been made aware. So, how exactly do you do that?

Every vehicle on UK roads is issued a Vehicle Registration Certificate which is also known by its official document number, V5C. Some know it as the logbook. The latest examples are red, blue and pink in colour, having taken over from the previous blue, green and cream style by late 2014. Your car will have been issued with a registration certificate soon after its original owner took delivery.

Selling your car on eBay? Here are our hints and tips:

The V5C is created by the Driver and Vehicle Licensing Authority (DVLA) as soon as it's first registered, and may be sent directly to the owner's home address. It's worth remembering, too, that the name on the registration certificate isn't necessarily the vehicle's owner, but the vehicle's keeper. Essentially, the keeper of a vehicle is the person legally responsible for it, even if another party actually paid for it.

How do I transfer car ownership?

Only a vehicle's registered keeper can legally transfer a car and its logbook into another name. Although the keeper of a car isn't necessarily its owner, he or she is responsible for its legal use, including insurance, tax, registration and roadworthiness. As the keeper's name is the only one to appear on the registration document, it is they who could face legal proceedings in the event of a motoring law being broken.

Whether selling your car or giving it away, you should inform the DVLA of a change of keeper, and that should be done immediately at the point that the vehicle changes hands. You'll find that section 6 of the V5C is left blank, ready for you to enter the new keeper's details.

As well as name, address and date of sale or transfer, you'll find a space to enter the car's mileage: this is optional but enables future owners to verify the car's mileage. There's also a space for the driving license number of the new keeper, but entering this is not required by law.

Very important, though, is the box to tick if the vehicle is changing keeper. This is provided because section 6 can also be used to indicate a change of the registered keeper's name or address – for example, after marriage or moving house.

After completing section 6, section 8, the declaration, must be signed and dated by both parties where a car is changing hands, or – in the case of a change of name or address – just by the registered keeper.

Planning to buy or transfer a number plate? We explain how:

You'll find sections 6 and 8 on the same page. This should be removed from the opposite page by tearing or cutting along the perforated centre fold, and then posted to the DVLA office. The address is:

There is no fee to transfer a vehicle into a new keeper's name, or to change the existing keeper's details, and the amended certificate will usually arrive within four weeks.

Section 10 of the V5C registration certificate exists to provide a new keeper with temporary documentation in the interim before a replacement V5C is issued in their name. It contains a simplified account of the vehicle details outlined in section 4, leaving out such information as the vehicle identification number, but including its registration number, make, model and date of registration.

There's also space into which the new keeper's name and address, and the date of sale or transfer can be entered. These should be the same details as entered into section 6. There are perforations that allow the section to be separated from sections 9, 11 and 12, all of which can be discarded. This new keeper's details supplement is officially referred to as the V5C/2.

Scrapping your car? Here's how to take your car off the road legally:

Section 10 of the V5C – or V5C/2– can be used to apply for road tax, which the new keeper will need to do before using the car on the road. It's worth noting, too, that the vehicle's existing taxation class is listed. If the vehicle has previously been registered with tax-exemption by a disabled keeper, the 'disabled' marker will need to be changed before the car can be taxed. In order to change a vehicle's taxation class, section 10 will need to be accompanied by a completed V10 'Application for vehicle tax' form.

Note that in order to tax a car it must have a valid MOT.

If you have yet to receive a V5C in your name as the new keeper of a car, but have lost your V5C/2 and need to apply for road tax, or if you're selling or transferring the car and have mislaid the V5C document, a replacement can be obtained by completing a V62 form. You will need to complete all five sections, including section 3 to indicate why you require a replacement V5C.

Selling or transferring your vehicle to a motor trader

If you are part exchanging your car or selling it to a motor trader, dismantler or scrapyard, you will need to fill in section 9, separate it from the rest of the V5C and send it to the DVLA at the address above.

The rest of the V5C must be given to the trader, dismantler or scrapyard.

Section 11 of the V5C is concerned with permanently exporting a vehicle, so that it no longer appears on UK roads. It requires only that the date of export is entered, and a declaration signed. This section must then be removed and sent to the DVLA at the address above.

The remainder of the V5C should be given to the exporter, who will need to use it in the country to which it is being exported.