What is the national speed limit?

Understanding the UK speed limits for dual carriageways, motorways and other roads 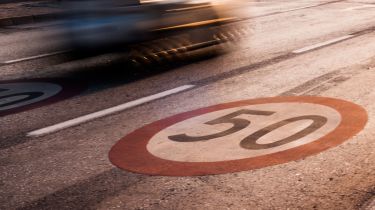 It’s been suggested that the UK’s 70mph motorway speed limit came about as a result of AC Cars testing its Le Mans-entered AC Cobra coupe on the M1 in 1964. Driven by Jack Sears, it reached speeds of up to 185mph near Watford Gap services, and at the time that was perfectly legal.

Truth be told, the 70mph limit that was temporarily introduced in 1965 (and made permanent in 1967) had more to do with numerous crashes in foggy weather than the exploits of the AC race team, but ever since then the UK’s speed limits have been a bone of contention for some drivers.

How do average speed cameras work?

Like just about every other nation, the UK now has a set of speed limits used as the front line for road safety. They’re there to give a consistent maximum speed for different road types and for differing vehicles. A good driver knows the importance of driving at the correct speed for the conditions and there are many occasions when driving below the posted speed limit is the correct course of action.

However, as time goes by we can forget which speed limit applies to which road. It’s also worth remembering that speed limits can be changed with very little warning. Then there are more recent introductions such as variable speed limits on motorways, as well as long stretches of road equipped with average speed cameras that make a moment’s inattention a potentially costly mistake.

Ultimately, speed limits are there for safety but it’s all too easy to be caught out and lose track of what the correct speed limit is for any given road, and that’s why we’ve put together this guide to keep you abreast of the latest limits and where and when they apply.

The most common speed limit sign in the UK is the round sign with a white background and a red border with a number written in large black letters in the middle – 20, 30, 40, 50 and 60mph are the typical posted limits you’re likely to see. Signs with red borders in the UK are typically prohibitive – you are prohibited from exceeding the posted maximum speed. 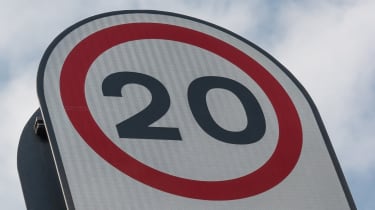 One speed limit sign that does tend to bring about cause for confusion is the national speed limit sign – a round white sign with a black bar running diagonally from the top right to the bottom left. On single track roads and single carriageway roads the speed limit is 60mph, but on dual carriageways (roads with a barrier or a divider of some sort separating the traffic flowing in opposite directions) it’s 70mph. Note that roads with two lanes of traffic flowing in either direction but only separated by double white lines or a painted hatched central divider should be treated as single carriageway roads with a 60mph speed limit.

You may occasionally come across a round blue sign with a number in the middle and if you do the number relates to a minimum speed limit. These are few and far between, generally used in tunnels and some bridges where keeping a steady traffic flow is vital. The same sign but with a red diagonal line across it signifies the end of a minimum speed limit zone.

You may also encounter flashing dot matrix signs on motorways or roads with overhead gantries. You need to be careful to differentiate between the two types. Those that are round and surrounded by a red border should be treated the same as the prohibitive type of sign described above – they indicate an enforceable maximum and change according to weather and traffic conditions. The ones that flash in white or yellow accompanied by flashing lights by their side are advisory limits. That’s not to say that you shouldn’t heed the advisory limit – there may be a queue of traffic up ahead or workers in the road for example, but they’re not enforceable speed limits per se.

The vast majority of road signs you come across are aimed at drivers of standard cars, but what are the limits if you’re driving a different type of vehicle or towing a trailer? Generally speaking the speed for vehicles other than cars will be lower than the posted limits and along with regional variations between England, Scotland and Wales, it can be a recipe for confusion.

Below are the UK national speed limits as they currently stand. We've listed each type of vehicle class and the maximum speeds permitted on each type of road for that class.

The above speed limits apply for large vans like the Ford Transit and Mercedes Sprinter weighing 3.5-tonnes. It also includes mid-size vans, such as the Ford Transit Custom and Vauxhall Vivaro. Commercially used single-cab pickups and pickups that weigh over 2040kg must also obey the same speed limits.

Restricted roads are generally those in built up areas and it can be difficult to work out what the speed limit is at any given point. If you can’t see any signs then it’s best to assume that if you’re in a built-up area with street lighting that the speed limit is 30mph. If the limit’s higher than this it will be posted by a standard speed limit sign, with smaller repeater signs mounted on street furniture along the route.

As mentioned in the section on speed limit signs, dual carriageways are those roads that have a divider between traffic moving in opposite directions, either a grass verge or something more substantial such as Armco. More often than not they will have two or more lanes of traffic in either direction, but this doesn’t have to be the case – you can have a dual carriageway with one lane of traffic in either direction.

Are there any other speed limits I should know about?

Increasingly, local authorities in urban areas are making use of the ‘20’s plenty’ mantra, reducing the speed in built-up areas to 20mph. Some authorities, particularly in major conurbations such as London, will have a blanket 20mph speed limit on all roads, others will use the 20mph limit only on residential streets while some others will enforce a 20mph limit around schools and hospitals.

From 2nd March 2020, the speed limit on all roads in central London inside the Congestion Charge Zone was reduced from 30mph to 20mph. Keep your eyes open for changes in the posted limit.

The speed limits in Scotland are almost the same for most road users as the rest of the UK. Some roads in urban areas will be marked as 20mph, all others without speed limit signs will be 30mph.

It’s only drivers of goods vehicles over 7.5 tonnes that need to be especially aware of their speed. They must not exceed 40mph on single carriageways or 50mph on dual carriageways. Goods vehicle drivers can still travel at the same speed limit as other road users on restricted roads and on motorways.

Speed limiters – do any vehicles have them?

While different classes of vehicle have different speed limits, some commercial vehicles are legally required to have a speed limiter fitted. For buses, coaches and minibuses this is 62mph, for HGVs this is 53 or 56mph, while moped riders are stuck at 28mph.

Cars were governed by the same laws as self-propelled locomotives (or traction engines as we’d probably refer to them today) when they were first started appearing in the late 19th century. Their speed was restricted to 10mph by an 1860 law, so as not to cause a danger to other road users – mainly pedestrians and horse drawn carriages. However, this was reduced by the Red Flag Act of 1865 to 4mph in the countryside and 2mph in towns. The new-fangled ‘horseless carriages’ had to have a person walking 50 yards ahead to warn other road users that a car was approaching.

By 1896 this law was repealed and the speed limit was raised to 14mph, while the walker in front of the vehicle was no longer required. The limit was upped again in 1903 to a heady 20mph but it was so widely disregarded, as cars became more commonplace, that in 1931 the speed limit was dropped altogether.

The 30mph limit we’re so familiar with today was introduced in 1943 on a trial basis in built-up areas – defined as anywhere with street lights – by Minister of Transport Leslie Hore-Belisha (of beacon fame) and it became mandatory in 1956. Two years later the limit was raised in some areas – to 40mph – to increase traffic flow.

The 1960s saw more limits being introduced, including a 20mph advisory limit when driving in fog, and, in 1967, a 70mph motorway limit and a 60mph limit for single carriageway roads outside urban areas. The limits have remained more or less the same since, although the fuel crisis of 1973 did see the introduction of a 50mph limit, which was dropped again in 1977.

Below is a list of speed limits and the kind of penalty you can expect, depending on how much faster than the posted maximum you have gone:

If you earn more than six penalty points within 24 months of passing your test, your licence will be revoked and you'll have to go through the whole driving test again.