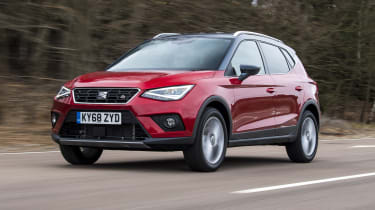 Most small SUVs are spacious, comfortable and decent to drive, but what do you do if you want one that offers some serious speed? This is when you’ll want to consider a small performance SUV.

While the Nissan Juke is credited with creating the small SUV class, the Nismo RS version of the Juke, launched in 2015, was also one of the first mainstream small performance SUVs. Power came from a turbocharged 1.6-litre engine producing 215bhp, which was a considerable increase over the standard car. It meant the flagship Juke could manage 0-62mph in seven seconds - a time not that far behind hot hatchbacks of the era.

Since then, a raft of small SUVs with extra sportiness have been launched. Some, such as the Ford Puma ST-Line and Skoda Kamiq Monte Carlo, have been more about appearance than performance, whereas others, such as the Volkswagen T-Roc R and Mercedes-AMG GLA 35, have upgraded powertrains that put them on par with hot hatchbacks in performance terms.

The smaller size and dimensions of small SUVs makes them cheaper to buy and insure than SUVs from the class above. One of the biggest advantages of the performance variants, however, is the way they drive when compared to the standard models, with most offering a more poised and agile driving experience.

Nearly every small performance SUV comes in a high-spec trim level, meaning all are well-equipped with such items as sports seats, sat nav, large alloy wheels, tweaked suspension and a sporty bodykit.

Our reader is looking for a small SUV with decent acceleration. For a budget of £16,000, there are several cars that fit the bill. All of our three picks are relatively new models, and all offer strong pace with composed handling.

The SEAT Arona is one of the best-handling small SUVs, with nicely weighted steering, well judged damping and a taut chassis. The FR Sport model gets stiffer suspension and 18-inch alloys with low-profile tyres – although this does result in a harsher ride, which won’t suit everyone. 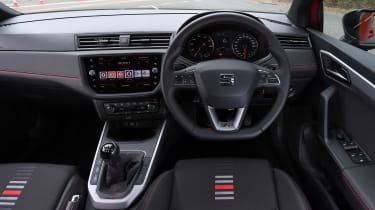 Sharing parts with other VW Group cars means the Arona lacks a little flair inside, but the cabin is very user-friendly. FR Sport cars get dual-zone climate, heated seats and an eight-inch infotainment system with full smartphone connectivity.

The quickest engine available in the Arona is a 1.5-litre four-cylinder petrol, which develops 148bhp and 250Nm of torque. That may not sound like much next to the Juke Nismo RS, but 0-62mph takes a brisk 8.2 seconds, and the Arona's sharp handling is the perfect accompaniment to that performance. 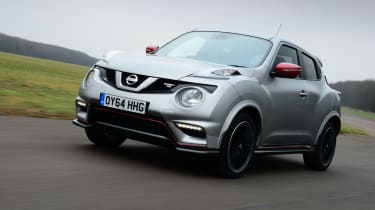 This Nismo RS version of the first Juke is the fastest car here, but don’t let the performance fool you; this sporty SUV’s handling doesn’t live up to its looks. The steering doesn’t deliver much feedback, the front wheels can get overwhelmed by torque, and body roll is a problem. 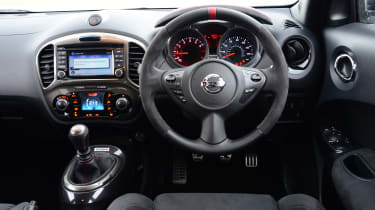 Inside, the Nismo RS feels cramped, while the sports seats and other racy trappings can't mask materials that are a little low-rent in places. The Juke's 5.8-inch infotainment screen also looks and feels dated next to the SEAT's slick eight-inch unit.

Powered by a turbocharged 1.6-litre four-cylinder petrol engine, and with a healthy 215bhp and 280Nm of torque, the Juke takes just seven seconds to get from 0-60mph. While this may make it quicker than the other two cars here, it's not a thrill-a-minute car to drive. At least it rides well, though. 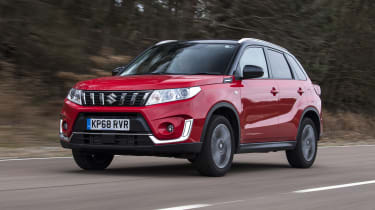 Suzuki’s Vitara is a bit of an unsung hero in the small-SUV world, being practical, fun to drive, well equipped and, when fitted with the firm’s 1.4-litre Boosterjet engine, decently brisk. What’s more, this sprightly performance is backed up by agile handling and plenty of grip.

The car is good value, too, with £15,000 netting a 1.4-litre Boosterjet SZ-T with 4,000 miles. We also spotted dealers with big discounts on new Vitaras; for £500 more, a factory-fresh version of the same model is within reach. 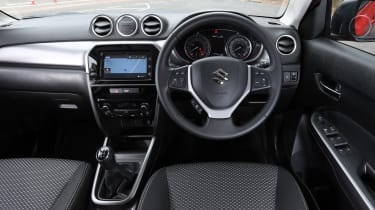 The Vitara's cabin all feels pretty well built, but it can't matchthe Arona for quality. There's plenty of equipment, though, with SZ-T cars getting climate control, a reversing camera and a (slightly aftermarket-feeling) seven-inch touchscreen.

The 1.4-litre Boosterjet petrol engine is the same as in the Suzuki Swift Sport warm hatch, and it produces 140bhp. That's enough for a 0-62mph time of 9.5 seconds and a top speed of 124mph. The Vitara's handling is decent and predictable, while its steering is accurate, if a little light.

All of our choices are excellent cars but if it were my money, I would pick the SEAT Arona FR Sport. It’s a fun car to drive, offering decent performance with sharp handling and plenty of grip. 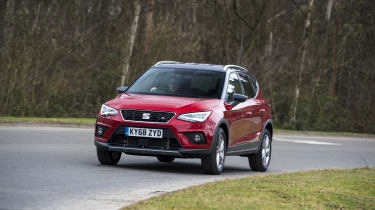 While some of the interior materials look and feel a bit cheap, and the ride can be a little harsh at times, I can easily overlook these minor issues because the Arona is relatively cheap to buy and won’t cost a fortune to run. As a newer model, it's also very well-equipped, boasting every modern amenity you could want, including sat nav and smartphone integration. Add in the excellent practicality, including a decent-sized boot, and it's my clear winner.

Want to know more about the best used SUVs you can buy today? Read our top 10 picks here. 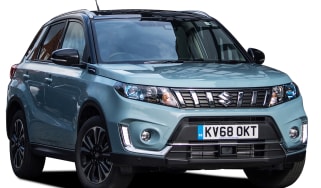 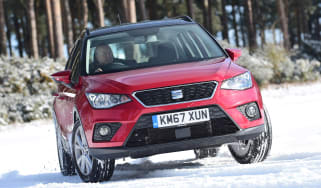