On paper, the hybrid really makes sense if you're looking for a practical family car with low running costs. It helps that it doesn’t cost a huge amount more than the petrol model to buy in the first place, either.

The running-costs champion here is the hybrid engine, which emits between 81 and 92g/km of CO2 and is claimed to return an average of between 80.7 and 70.6mpg. The reason for the differences comes down to the size of wheels fitted – the bigger they are, the more CO2 produced and fuel used – but in real-world driving you're not likely to notice a difference.

The fact that this brings Benefit-in-Kind (BiK) tax down to the 17% bracket is enough for us to recommend the hybrid to company-car users, but urban dwellers might be more likely to match its claimed fuel economy figures than those who live in the countryside. This is because the hybrid will only run in fuel-saving all-electric mode for short bursts at relatively low speeds. 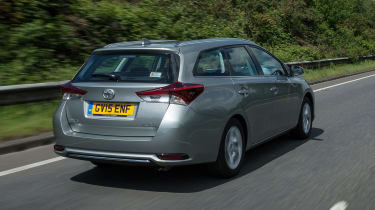 Those who do less town driving might prefer the less expensive 1.2-litre petrol, which produces CO2 emissions of between 112 and 126g/km (so BiK starts at 21%) and fuel economy of 58.9 and 51.4mpg, depending on wheel size and choice of gearbox.

With the exception of the hybrid, which is liable for £130, annual road tax is £140 from the second year.

Insurance groups for the Auris Touring Sports range from 12 for the entry-level petrol model to 14 for the top-spec Hybrid. This compares favourably with rivals such as the Vauxhall Astra Sports Tourer (which ranges from groups 9 to 17) and Ford Focus Estate (groups 11 to 22), although the Auris can’t quite match their performance.

The Auris Touring Sports comes with an excellent five-year/100,000-mile warranty, which outstrips the typical three-year/60,000-mile cover offered by many rival manufacturers. Kia still trumps them all, though, with a seven-year policy on the Kia Cee’d SW estate. Toyota will sell you an extended warranty for your Auris estate if you want to extend the cover beyond five years.

The hybrid model’s battery is covered for unlimited miles up to 10 years, as long as it undergoes a regular ‘Hybrid Health Check’ (which is included in normal servicing of the Hybrid).

Toyota offers fixed-price servicing across its range. An intermediate service for an Auris costs £180, a full service costs £330 and what Toyota calls a ‘Full+’ service will set you back £390. Every Auris needs a full service every 20,000 miles or two years.