Estate body shape is very practical and the boot is huge

The Toyota Auris Touring Sports is more about touring than sport, which is just as well, because it’s an easy car to live with. There’s plenty of luggage space, and although room for passengers is a little limited, there’s bags of space for, well, bags.

The Auris is blessed with a large boot (see below) but space inside for the driver and passengers is only average. Particularly in the back seats, taller occupants will feel a bit cramped and probably won’t fancy the idea of a long journey in the Auris. The front seats are much more spacious, though, so there should be no serious complaints here. 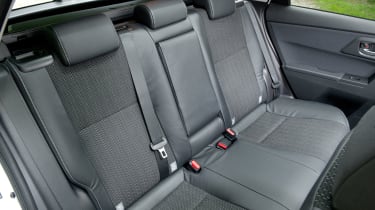 Storage-wise, there’s a generously sized glovebox and plenty of cubbies around the cabin for holding your bits and bobs. There are no less than three power sockets, too – including one in the boot.

Regular seat-up luggage capacity in the Auris Touring Sports is 507 litres – not quite as much as the 605 and 610 litres you get in the VW Golf Estate and Skoda Octavia Estate respectively. 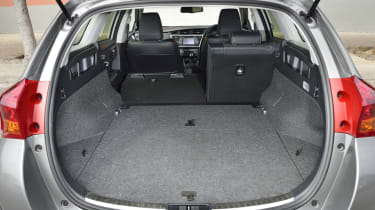 With the 60:40 split rear seats folded down, however, the Auris’ luggage area expands to 1,635 litres – which is more than the VW can offer in the same configuration and not too far off the 1,775-litre total capacity of the class-leading Peugeot 308 SW. And unlike some hybrids, the Auris estate doesn’t sacrifice any boot space to accommodate its batteries.

The 1.33-litre petrol and 1.4-litre diesel versions of the Auris Sports Touring can haul a 1,000kg braked trailer, while the 1.2-litre petrol and 1.6-litre diesel up that limit to 1,300kg. The Auris lacks a powerful diesel engine like the ones offered in the Ford Focus and Vauxhall Astra estates – needed to make it a truly effective tow car. Also, the characteristics of the hybrid mean it can’t be used for towing at all.