The Toyota Camry comes with just one petrol hybrid powertrain in the UK, and while its on-paper fuel-efficiency won't blow away diesel drivers, it qualifies for much lower BiK bands. This will go a long way to boosting the Camry's chances with fleet operators and business drivers, who are expected to make up around 80% of Camry drivers.

Blending a 2.5-litre petrol engine with a powerful electric motor and battery pack, the Camry can return up to 53.3mpg according to the WLTP cycle. Our UK drive, covering motorways, country roads and urban areas, returned 51mpg, so Toyota's figure looks easily achievable. CO2 emissions are 98g/km with 17-inch wheels fitted and 101g/km when shod with 18-inch versions, resulting in BiK bands of 23 and 24%. Most rival diesels face a 4% BiK surcharge, and a comparable Skoda Superb 2.0-litre TDI finds itself in the 30% bracket, meaning big potential savings for Camry customers. 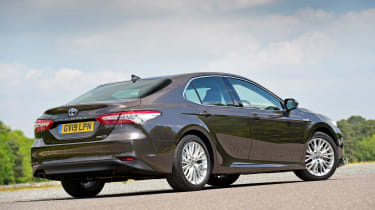 You can also save more fuel if you're able to keep the Camry running on battery power alone, which is possible mostly in stop and start traffic for a mile or two. It's in this environment where the Camry's hybrid set-up is at its best, allowing you to pull away and coast around without troubling the petrol engine.

From the second tax payment onwards, every Camry costs £135 a year to tax. However, those models costing in excess of £40,000 with options incur a £320 surcharge for five years, bringing the total to £455.

There's no word on insurance groups yet, but the mechanically similar Lexus ES has been given rankings from 33 to 38 out of 50. The slightly cheaper and more mainstream Camry is likely to sit just below this, while the Skoda Superb spans groups from 12 to 29 depending on its engine and trim level.

Interestingly, while the Lexus ES is essentially a posher reworking of the Camry, it's the Toyota that has the more impressive warranty. It lasts for five years/100,000 miles, as opposed to three years/60,000 miles, providing extra reassurance for customers. It also gives the Camry a longer warranty than rivals like the Ford Mondeo Hybrid and Volkswagen Passat GTE, which have three years of cover.

Servicing for the Toyota Camry is likely to be required annually, switching between minor and major services. It's also worth noting that thanks to the hybrid's regenerative braking, wear and tear items like brakes and tyres tend to last for longer, giving long-term running costs a boost.