Few people will expect an invigorating drive from a car designed foremost for fuel efficiency, but the Prius is actually quite enjoyable from behind the wheel. It handles well, with less body lean and more accurate steering than its slightly cumbersome predecessor, although its narrow low-resistance tyres give less grip than the wide tyres of more conventional rivals.

Driving the Prius can take a little getting used to. Not only is the noise (or lack of it) when pulling away a little disconcerting, but the pedals feel a bit strange. The Prius harvests energy from its brakes to recharge its batteries and this can give the brakes an unnatural feel, but Toyota has done a good job of minimising this effect.

The car’s CVT automatic gearbox can sometimes cause the engine to rev noisily when you accelerate hard, but Toyota has worked on its setup so that it relies more on the electric motors instant muscle, requiring less hard work from the petrol engine. Other than this, the Prius is a relaxing car to drive – especially when maintaining a constant speed on fast roads.

In the Prius AWD, the extra drive is supplied by a 5.3kW motor and inverter mounted to the rear axle. AWD is engaged at all times below 6mph to provide smoother traction when pulling away from a standstill and from 6mph to 44mph it engages only when the car’s sensors detect front-wheel slip. Most of the time, it operates in front-wheel drive mode and feels like a normal Prius. 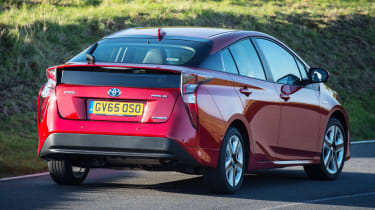 The Toyota Prius uses a 97bhp 1.8-litre petrol engine combined with a 71bhp electric motor. Together, they get the car from 0-62mph in a claimed 10.8 seconds and ensure it feels nippy at low speeds. The AWD model is a tenth of a second slower to 62mph and runs out of steam at 99mph - the two-wheel drive model will run to 111mph where conditions allow. The plug-in model is marginally slower (it’s 150kg heavier than the standard car), taking 11.1 seconds to cover the sprint from 0-60mph.

Initial acceleration is resonably swift thanks to the car’s electric motor, which delivers all its pulling power instantly. The plug-in hybrid – which can use its generator as a secondary electric motor for extra power – can manage over 80mph on electric power alone, although this may cause range to reduce rapidly. When the petrol engine starts up to supplement the electric motor, it does so with a minimum of fuss and is barely noticeable when it kicks in.

In the AWD car a separate electric motor powers the rear wheels permanently at speeds of under 7mph for exceptional traction off the line. Above this speed and up to a maximum of 44mph it intervenes only when it senses the front wheels spinning due to a lack of traction.

The Prius plug-in hybrid is very good at juggling between its electric motor and petrol engine, with the latter far less intrusive than in the old model. This is especially the case if you need to quickly accelerate as you pull onto a motorway or overtake slower traffic.