The interior of the new Toyota Prius is smart, high-quality and comfortable

If fuel economy is the Prius’s primary appeal, its relaxing, quiet nature comes a close second. At low urban speeds, where some journeys might be made with minimal use of the petrol engine, there’s hardly any noise. The engine is unobtrusive when it comes to life and quickly fades to a background hum at cruising speeds. The plug-in does have a slightly more harsh ride than the regular Prius – a consequence of the additional battery weight.

There’s plenty of space inside – although the plug-in only has rear seats for two. Equipment is also generous, but although the Toyota Prius has some tactile, soft-touch plastics, it's still no match for the likes of the VW Golf GTE inside.

The regular and plug-in hybrid versions of the Prius are largely the same inside. The latter has a few additional controls for its various operating modes, along with extra graphics on the control screen. The seven-inch (eight-inch in the plug-in) screen is generally clear and easy to read, while the facelift has made the system more responsive and added a pinch and swipe interface similar to that of a smartphone. Rather strangely, the controls for the heated seats are hidden behind the central fascia, but other than that the layout is intuitive. 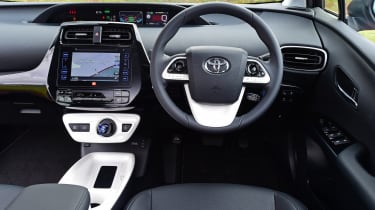 The Prius Active comes with adaptive cruise control, lane-departure warning, a leather-trimmed steering wheel, LED headlights, keyless go, dual-zone climate control, 15-inch alloy wheels and the Touch 2 touchscreen infotainment system with DAB digital radio. It is disappointing that even on the recently revised Prius, Toyota still does not offer Apple CarPlay or Android Auto with their ‘Touch 2’ multimedia system however.

Business Edition trim costs roughly £900 extra and adds automatic wipers, wireless phone charging, heated front seats, a head-up display that beams information onto the windscreen and a blind-spot monitoring system. Business Edition Plus trim is a further £1,800 and includes larger 17-inch alloy wheels (although smaller wheels are optional, should you want to improve fuel consumption and CO2 emissions), all-round parking sensors and a self-parking system. This is our preferred trim level.

Top-spec Excel models cost about £1,500 more than Business Edition Plus, and for that the Prius comes with leather seats, sat nav, an upgraded JBL stereo, rain-sensing windscreen wipers and 17-inch alloys. Note that you can opt for 15-inch alloys on this model for free, though, if a lower BiK rating is important to you.

You’re able to customise the interior of the latest Prius with colour-coding options, such as gloss-white highlights for certain panels. Other than that, plus a range of metallic colours, there's little scope for personalisation with the new Prius.

The Business Edition Plus plug-in model has the option of a roof-mounted solar panel that’s claimed to offer up to three miles of extra battery range a day, but cloudy UK weather may reduce its effectiveness. Interestingly, it’s not available on the better-equipped Excel, as its additional weight would exceed Toyota’s target figures for the Prius.

The Toyota Prius is a thoroughly modern car underneath, but its Touch 2 infotainment system can be fiddly to operate. The on-screen menu icons are often small and surrounded by lots of blank space, making them hard to press, particularly when driving. Inputting addresses into the sat nav is similarly difficult and although the buttons on the dashboard are touch-sensitive, they need a firm prod to work properly. Recent improvements have made it more intuitive, but it still lags behind the system used in the new Toyota Corolla hybridactive. 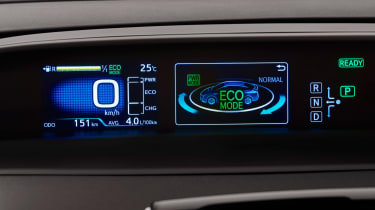 There’s better news when it comes to some of the other technology on offer. The lane-departure warning system gives clear prompts if it senses you’re straying into another lane, while the optional self-parking system quickly scanned, found and manoeuvred into a suitable parking space. If you want it to exit a parking space for you, though, selecting this function is an involved process.