"Despite its name, the Volkswagen Golf GTE isn't a GTI, but it is fast and inexpensive to run"

The plug-in hybrid Volkswagen Golf GTE is positioned at the sporty end of the model’s range – and on paper it seems to live up to those famous first initials. It looks the part, too, with some of the Golf GTI’s trademark style.

That helps the Golf GTE fight its larger plug-in hybrid rivals, including the Mercedes C350e and BMW 330e, as well as its Audi A3 e-tron sister car and the cheaper Toyota Prius Plug-In and Hyundai Ioniq Plug-in Hybrid. The VW is a little less expensive than those three, but a lot costlier than a Golf GTI.

The first thing to note is that alterations to the UK’s Vehicle Excise Duty (VED) system in early 2017 scuppered the tax-exempt status the GTE previously enjoyed – it now costs £130 a year to tax. However, its low CO2 emissions are still a big incentive for company-car drivers, as they bring its Benefit-in-Kind (BiK) bracket down to 9%. Private owners will also find the GTE’s claimed fuel economy rather appealing – 156mpg is said to be possible and in all-electric mode it can whiz around silently for up to 20 miles. 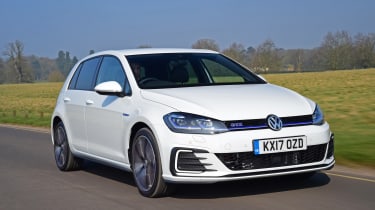 But how ‘GT’ is the GTE? Covering 0-62mph in 7.6 seconds is brisk by any standard – even if it can’t match the GTI’s 6.4 seconds – and the fact that this performance is delivered by a small 1.4-litre turbocharged engine seems remarkable. Of course, the electric motor has a big part to play; it’s the same as that used in the Audi A3 e-tron and brings total power to 201bhp. Whether the car is running on petrol, electricity or a combination of both, the GTE’s hybrid setup makes for quiet, effortless progress.

Unfortunately, the motor and its batteries add rather a lot of weight to the Golf and you can sense this on a spirited drive down a country road. Although the GTE grips and holds the road as well as any other Golf, its extra heft can be felt through the controls, which don’t feel as sharp and alert as you might like – and certainly can’t match the GTI’s. Think of it more as a fast but clean alternative to other models in the Golf range and it makes far more sense.

The hybrid Golf isn’t tops for fun, then, but as a cruiser it’s very accomplished – even though the weight of the electrical equipment requires slightly firmer suspension, which means the ride isn’t quite as pliant as on conventionally fuelled Golfs. The GTE is very quiet indeed and never feels short of power, which makes it relaxing on motorways or when you need to overtake on country roads.

In short, there’s little to distinguish its driving manners from the more expensive Audi A3 e-tron.

The Golf can be distinguished by a number of blue motifs, carried in the badges, trim strips and headlamps. Inside, there’s an eight-inch screen for the infotainment system, which includes sat nav. There are design flourishes that GTI owners will recognise, too, such as the textured ‘golf ball’ gearknob and tartan seat upholstery.

The Volkswagen Golf finished 18th out of the 75 cars ranked in our 2017 Driver Power owner satisfaction survey of cars currently on sale in the UK.

Given the GTE’s name, buyers looking for a fun car to drive may be disappointed, but if you look at it as a supremely capable touring hatchback with low post-purchase costs, you should be very satisfied. The economical Golf GTD diesel still seems a more logical choice, though, thanks to its much lower purchase price.