The latest Toyota Prius is more practical than ever. Its batteries are smaller and more efficient than the previous model’s, while placing them under the back seats has increased both boot capacity and rear legroom. However, the plug-in version makes a few concessions for its bulky extra battery pack – it sacrifices some boot space and loses its centre rear seat.

The deep dashboard means there’s a blind spot caused by a thick windscreen pillar in your eye-line – this can be a nuisance when you’re trying to peer around tight bends or pull out at junctions. The rear windscreen splits horizontally and the obstruction to your view can be distracting, but otherwise visibility, particularly out the front, is very good.

Legroom is impressive no matter where you sit in the fourth-generation Prius, but anyone over six feet tall will need to slump slightly in the rear seats to avoid rubbing their head on the roof. Access to the rear seats is good, though, thanks to wide-opening back doors. 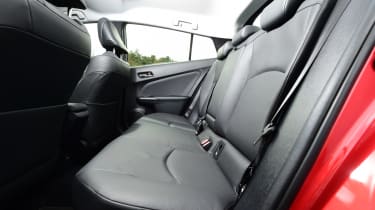 There’s plenty of room in the car generally and the cabin feels light and airy. Storage cubbyholes abound, including large door bins, a decent glovebox, a large storage area under the front armrest and a recessed well between the front seats. There are two ISOFIX child-seat mounting points on the back seats. There's also a large tray in the centre console, which doubles up as a wireless phone charger on higher-spec models. Do note that choosing the plug-in Prius means you only get two seats in the back. 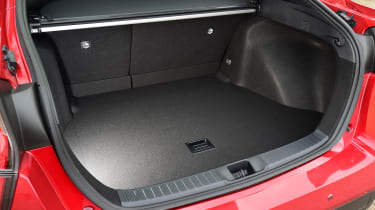 In the latest Prius, the batteries are located under the rear seats rather than under the boot floor, which enables a larger boot than previous models. There’s 457 litres of space if you load the boot to the rear windscreen, or 343 if you load to the height of the parcel shelf. However, the plug-in version has additional batteries under the boot floor, which raises its height somewhat and brings the total load capacity to cramped 191 litres under the parcel shelf or 360 litres when loaded to the roof. Handily, the charging cable does at least get its own storage space, so it isn’t left to slide around in the boot.

Folding the rear seats down gives you a flat load floor, so it’s easy to slide in long, heavy items. In this configuration, the regular Prius offers 1,633 litres of load space and the plug-in provides 1,204 litres.

For the first time in the Toyota Prius' history, the latest model is capable of towing a maximum of 725kg – in other words, a trailer or small caravan. The towing hitch detaches and can be stored in a bag in the boot of the car, then all of the connecting hardware is hidden behind the car's rear bumper. Toyota hasn’t published figures for the plug-in version, so it's likely it won't be suitable for towing.