Hybrid cars draw buyers with impressive headline economy figures, and it has to be said these can sometimes be difficult to reproduce in everyday driving. However, the most recent hybrid cars are better than ever and thousands of private-hire drivers can vouch for the cost-effectiveness of the Toyota Prius. 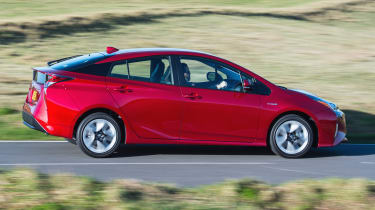 The latest WLTP tests have pegged the Prius’s impressive official economy figures, with the standard car fitted with the smaller 15-inch wheels now claiming up to 67.2mpg. Fitting the larger 17-inch wheels drops this figure further to around 60mpg combined.

The slightly heavier AWD model is also at a disadvantage, which is said to return 58.8mpg. However, this a model for motorists who want the advantages of four-wheel drive but don’t want a big SUV. The Prius AWD still manages to be eco-friendly, offers low running costs and benefits those who live in the countryside where bad winter weather can be an issue.

However, the good news is that our experience of the Prius is that in normal driving it gets closer than most to delivering its claimed figures. This means fuel bills will be very low. Toyota says the new Prius’ economy improvements have come about by making the hybrid system more efficient and lightening certain parts of the car. This compares favourably to the slightly poorer on-paper and real-world fuel consumption offered by the Hyundai Ioniq and Kia Niro.

Prius CO2 figures are low, starting at 75g/km, however the top-spec models have larger wheels increasing CO2 emissions to 85g/km – just 1g/km lower than the AWD model. Owners of the latest Prius avoid the London T-Charge though, saving £10 per trip compared to owners of a 2003 car.

Company-car drivers will find the low Benefit-in-Kind (BiK) of the entry-level Active mode appealing, but move up the range and you attract a higher rate of tax. For instance, those models fitted with 17-inch alloys wheels or all-wheel drive attract a slightly higher BiK rating. Road tax costs £140 a year, £10 less than for a petrol or diesel model.

The Prius spans a narrower range of insurance groups than other hatchbacks, because only one petrol engine is offered. The Prius hybrid is rated in insurance group 14, while the plug-in version is likely to cost more to insure, because of its higher group 22 insurance rating.

Toyota offers three levels of fixed-price servicing on the Prius and will be happy to advise you of a service plan to cover your needs. Expect prices to start from around £15 per month.

All new Toyotas benefit from an impressive five-year/100,000-mile warranty. An extended 11-year/unlimited-mileage battery warranty can also be purchased for extra peace of mind.