Despite the bulky battery packs that sit under the Toyota Prius+, it’s actually a practical and spacious seven-seat car.

There’s no shortage of space for people and luggage inside the Prius+. The door pockets are of a decent size and there’s a large cubby between the two front seats, although being side-hinged, it’s tricky for the passenger to see inside. There’s a pair of cup-holders here, one in front and one behind the cubby. There’s also space beneath the centre console and a pair of gloveboxes means it’s easily up to the tasks of family life.

The driver and front-seat passenger are served well for space, as are any travelling in the middle row. Each seat folds individually, meaning the middle can be dropped to form a large armrest for the outermost passengers.

Predictably, it’s more cramped in the third row of seats. While you can squeeze a couple of adults in there for short journeys, they’re better suited to children. A pair of cup-holders is a bonus here. It’s easy to forgive that, as it is with the likes of the BMW 2 Series Gran Tourer, as they’re far shorter than full-sized seven seaters like the Citroen Grand C4 Picasso and Ford Galaxy. 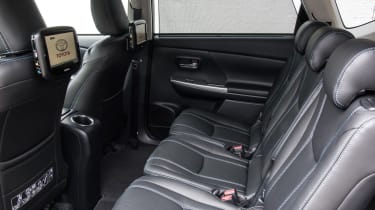 With all three rows of seats in place, boot space is rated at a city-car-like 200 litres. That sounds miserly, but on par with most other MPVs with all seven seats in use. In its more commonly used five-seat format, there’s 505 litres of space. That’s more than the similarly sized Toyota Verso.

There’s a bit of a lip to lift luggage over, but the boot is a good, square shape and the pull-out luggage cover is easy to operate.

Fold each of the three seats, which is possible with a pull of a lever on each seat back, and they fold flat. An extra flap of boot carpet drops down to cover the gap between the seats and boot floor, making it easy to slide luggage in. 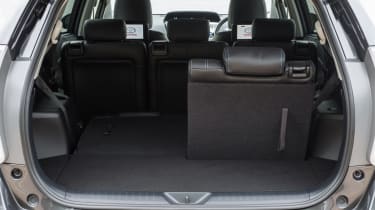