The Toyota Verso offers space for five adults and the rear seats can carry two kids. There’s plenty of room for the family’s paraphernalia, too

The Toyota Verso has a relatively stiff suspension set-up that means there’s no unseemly pitching and rolling over bumpy, undulating roads, which should keep the chances of child motion sickness to a minimum.

The ride isn’t too hard though, so the Verso manages to deal with the worst the UK’s most lackadaisical road builders can throw at it. It doesn’t crash or shudder over big bumps, and stops smaller ripples infiltrating the cabin.

The Toyota Verso has been designed to be easy to live with, so there’s plenty of adjustment for the seats and steering wheel and the dashboard is clear and easy to find your way around. The gearstick is set high on the dash, so is easy to use, and while it’s slightly quirky these days to have the instruments set in the centre of the dash top, they are at least clear and simple to understand at a glance. 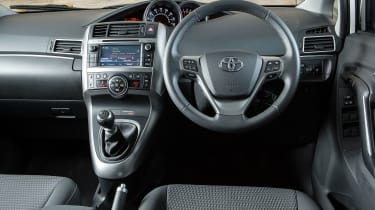 There’s no faulting the way the interior in the Toyota Verso has been put together, but the trims used definitely don’t feel as classy as those in big-name rivals such as the Renault Grand Scenic. It’s all very robust, but you’ll never feel like you can luxuriate in the surroundings of your Verso.

The Toyota Verso is pretty well kitted out at standard. It’s available in three specification levels: Active, Icon and Design. 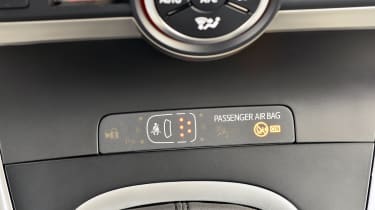 There aren’t that many major options, but many smaller accessories. The extra £300 you could spend on front and rear parking sensors should be money well spent, but they're standard on most rivals. Other options are mainly geared towards towing, with a detachable towbar and 13-pin wiring costing £600, and entertaining rear passengers – although powered iPad docks costing £500 seem extravagant.