The Toyota Verso has strong used values and should hold its value as well as the best cars in its class, although you should be aware that it requires more frequent servicing than they do. The good news is that fixed-price maintenance should mean there are no surprise bills. All Toyotas also get a five-year warranty as standard.

The Verso is cheap to run as a company car, however, and should hold on to around 42% of its list price after three years. That’s a fair bit better than rivals such as the Renault Grand Scenic.

If you’re after the ultimate in Verso fuel economy, the 1.6-litre diesel is the model to go for, because it’ll do an average of 62.8mpg and emits 119g/km of CO2, which makes it attractive to both private buyers and company-car users. The figures are an undoubted improvement over those for the 2.0-litre diesel it replaced, but it still isn’t a match for rivals such as the Vauxhall Zafira Tourer. 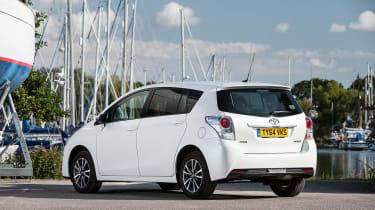 The two petrol-engined Toyota Verso models are equally middling, with the 1.6-litre managing a claimed average of 41.5mpg and 153g/km of CO2. The 1.8-litre petrol comes with a CVT automatic gearbox and is actually slightly better than the 1.6-litre, with fuel economy increasing slightly to 43.5mpg.

People need family MPVs such as the Verso because they’re cheap to run as well as flexible, and here the Verso scores well. Insurance ranges from groups 10 to 11, which are low for the class.

Toyota covers your Verso against mechanical mayhem for five years or 100,000 miles. If it develops rust with the first 12 years of its life, Toyota will sort it out, and breakdown cover is included for the first year.

This is where the Toyota Verso falls down slightly, because you have to get it seen by a dealership every 12 months or 10,000 miles. Rivals have longer servicing intervals. Buyers can choose a service plan to help spread the cost of routine maintenance, and pay from around £15 a month.