Given the Toyota Verso is designed to be as easy to live with as possible, it’s a surprise that its boot isn’t a little larger. Still, the interior is practical and the seats can be arranged in many different combinations.

As you’d expect, there are plenty of storage areas, including two gloveboxes, cup-holders and door pockets. That said, the gloveboxes are pretty small and the door pockets extremely narrow, so they’re useful for holding maps and paperwork, but not much else. 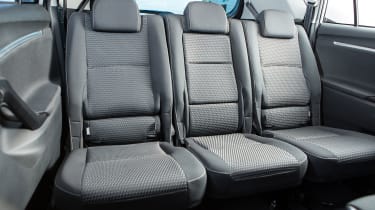 A flexible seating system makes the Toyota Verso very practical to live with on a daily basis. The basic Toyota Verso Active has five seats, but two extra seats in the boot are standard on the rest of the range. They fold flat into the boot floor and are useful if you ever need to carry two extra kids, although they’re too small for adult use.

The second row of three individual seats can also slide backwards and forwards, allowing for a larger boot or more legroom as required.

The Toyota Verso isn’t really up to carrying a great deal of luggage; its boot is tiny with all seven seats raised and only adequate with the third-row seats folded into the floor. 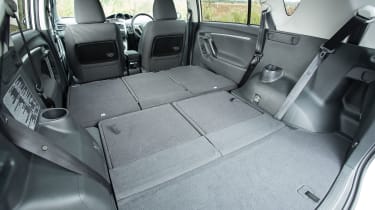 With all seven seats in use, there’s just 155 litres of boot space, which grows to 440 litres with the back row of seats folded away. Fold all of them down and you get 1,696 litres in total. That is, however, less than you get in the Ford S-MAX (2,020 litres) and considerably worse than the Citroen Grand C4 Picasso (2,181 litres).

The Toyota Verso isn’t one of life’s great tow cars. It has a maximum towing capacity of 1,300kg and a 55kg towball limit, so is restricted to small caravans or medium-sized trailers.