Low running costs continue to be a very high priority for family buyers and company-car drivers – who between them will make up a large proportion of Astra owners. Vauxhall has catered to this with a range of efficient turbocharged petrol and diesel engines for the Astra, all offering a decent balance between performance and fuel-efficiency. The engine line-up was completely swapped over for the facelift in 2019, ushering in a new generation of three-cylinder engines.

Unsurprisingly, the diesel versions of the Astra should be the cheapest to run, and Vauxhall claims an impressive 65.7mpg fuel economy and 120g/km CO2 emissions for a low Benefit-in-Kind company-car tax rating.

This drops slightly for the 120bhp version of the 1.5-litre Turbo D engine with a nine-speed automatic gearbox, falling to 56.5mpg with emissions of 131g/km.

Low-mileage (below 12,000 or so a year) drivers should go for a petrol model. All three versions of the fuel-efficient 1.2-litre Turbo can return up to 54.3mpg and emit between 119-126g/km of CO2, for similarly decent BiK ratings. The 1.4-litre with a 'Stepless' automatic gearbox manages up to 50.4mpg. 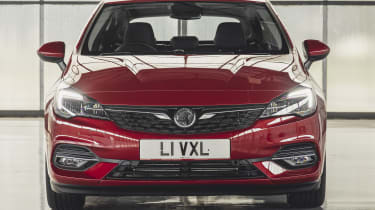 Insurance groups for the facelifted Astra, with its new engines, are pretty similar to the pre-facelift model. It ranges from group 14 out of 50 for the least powerful petrol version in SRi trim up to 20 for the cheapest trim levels with the 120bhp diesel engine, so cover shouldn’t break the bank no matter which one you go for.

The Astra comes with the same three-year/60,000-mile warranty that’s offered on all new Vauxhalls, which looks a bit sparse next to the five and seven-year plans of key rivals the Hyundai i30 and Kia Ceed. Unfortunately, Vauxhall’s ‘Lifetime’ 100,000-mile warranty is now a thing of the past, but an extended warranty can be purchased once the original cover runs out, protecting you from repair costs for up to 100,000 miles.

Every engine in the Astra range requires servicing after 20,000 miles or annually, so the latter is more likely unless you're a high-mileage driver. Vauxhall offers service plans, including Vauxhall Care, which costs around £20 per month. This covers the first three services, three years of roadside assistance and the first MOT.