While not a class leader in this area, the Vauxhall Insignia Grand Sport is impressively spacious

The Vauxhall Insignia Grand Sport doesn’t have the largest boot or interior in its class (those honours go to the Skoda Superb), but it’s a practical and spacious family car. The fact an entry-level Insignia can be bought for a similar price as a diesel Volkswagen Polo SEL also gives food for thought. 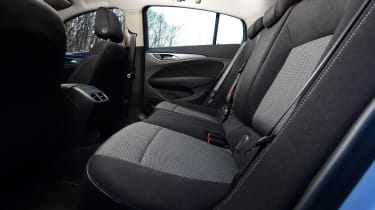 Four adult passengers will be able to get comfortable inside the Insignia. Front-seat space is rarely a problem in this class of car, but the outgoing Insignia had slightly cramped rear seats thanks to its sloping roofline.

That problem has been somewhat addressed in the new Insignia, although its tapered silhouette means rear headroom could still be a little better. The news is far better where legroom is concerned, with vast amounts of space to stretch out in the rear.

The Insignia’s seats are genuinely comfortable (made all the more so if you choose the optional orthopaedic AGR seats), interior storage is strong and the driving position is excellent. The door bins are all of a decent size, the glovebox is reasonable, while three lidded central cubbies hide a pair of cup-holders and two depositories for the assorted gubbins that are part and parcel of any road trip. 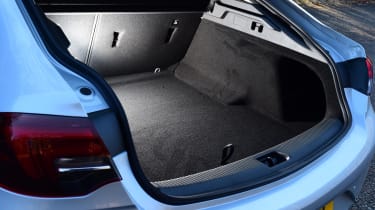 Things are slightly less impressive in the boot, where the Insignia Grand Sport’s 490 litres of storage is roughly 10% down from its predecessor, and smaller than the boots found in the Skoda Superb (610 litres), Ford Mondeo (550 litres) and VW Passat (586 litres). It’s a well shaped boot, though, even if there’s a fair load lip to lug luggage over. If you fold the rear seats luggage space grows to 1,540 litres, which is up on the Mondeo, but down on the Superb.

The 1.6-litre diesel with an automatic gearbox has the lowest towing ability, but its 1,300kg capacity for a braked trailer is still enough for a small or medium-sized caravan. The 1.5-litre petrol and manual 1.6 diesel can tow 1,405kg, while the 2.0-litre diesel can haul 1,950kg (1,700kg with an automatic). Top honours go to the most powerful four-wheel drive diesel though, that can tow an 1,805kg trailer.