Cars are products that – in general terms – are hugely improved with every update. The Vauxhall Insignia Grand Sport is an excellent example of this upward trend. It’s almost 200kg lighter than the car it replaces and its engines are more efficient, which means it’ll be cheap to run. It’s also, somehow, less expensive than the old Insignia, and undercuts almost all of its rivals. 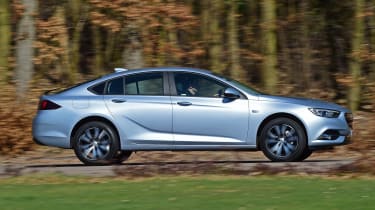 Company-car tax is likely to be the make-or-break point for the Insignia, as the vast majority of sales will go to fleet buyers; the news here is excellent.

Because tax obligations for company users are determined by the car’s price combined with its CO2 emissions, the Insignia’s low list price works in its favour. The Insignia engine with the lowest CO2 emissions – the 109bhp 1.6-litre diesel – emits 116 grams of carbon dioxide every kilometre (g/km), but it’s not the best choice for company-car users. The extra tax on diesel means that the entry-level petrol actually has the lowest Benefit-in-Kind (BiK) rating.

That’s a reasonably low percentage, and while the Volkswagen Passat and Skoda Superb are available with engines that sit in a lower BiK bracket, those cars’ list prices are significantly higher than the Insignia’s. In fact, Vauxhall says over the course of four years, choosing an Insignia Grand Sport over the Passat (SE Business 120PS 1.6-litre diesel model) will save company-car drivers almost £2,000, while the Superb (SE Technology 120PS 1.6-litre diesel model) will be around £1,300 costlier.

The 138bhp petrol engine officially returns 45.6mpg, while the 163bhp version is almost as efficient. Stepping up to the 197bhp 1.6-litre drops economy to 42.2mpg, and brings a much higher BiK figure. Choose the 109bhp diesel and economy stands at 57.7mpg, dropping to 54.3mpg if you opt for the 134bhp 1.6-litre. Note that pairing the latter engine with an automatic gearbox sees economy officially drop to 48.7mpg, which is less than what the 2.0-litre diesel manages when paired with a manual.

One word of warning: if the Grand Sport is like its predecessor, expect secondhand values to be somewhat unimpressive – although this won’t be of concern to company-car customers.

Insignia Grand Sports will cost £145 a year in road tax, but if you added some options to the top of the range GSi Nav model you could find yourself over the £40,000 barrier in which case you would pay an additional £320 a year for VED.

Vauxhall’s three-year/60,000-mile warranty is average and nowhere near as generous as the five-year guarantees offered by Hyundai and Toyota, nor the seven-year policy provided by Kia.

The Insignia requires servicing every 20,000 miles or once a year, whichever comes first, and Vauxhall’s fixed-price servicing packages and maintenance jobs should make taking care of the Insignia Grand Sport an easy and reasonably affordable process. Vauxhall Care costs around £20 per month, including three services, three years of roadside assistance and the first MOT.