"The Vauxhall Insignia is a comfortable family hatchback that works well on the motorway and has proved popular, despite its somewhat dull image."

The Vauxhall Insignia is a large family car that’s also popular with company-car drivers, thanks to its value and the fact it can undercut rivals like the Volkswagen Passat, Skoda Superb, Ford Mondeo and Peugeot 508.

Perhaps the biggest downside for private buyers is the Insignia’s poor resale value, but if this isn’t something you need to worry about, there’s lots to like about the Vauxhall – it’s roomy, good-looking, comfortable and comes with plenty of kit.

We’d recommend avoiding the entry-level 1.8-litre petrol, which is a dated engine that takes a sluggish 11.5 seconds to get from 0-62mph, yet it doesn’t make up for it with impressive economy, returning just 38.7mpg with high CO2 emissions meaning £210 annual road tax if registered before April 2017. 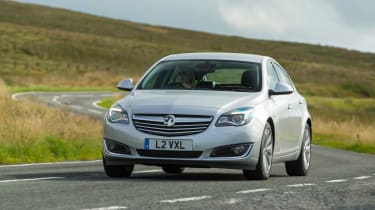 The 1.4-litre turbocharged petrol is more advanced, and despite having the same 138bhp, it has more pulling power, takes 10.9 seconds to hit 62mph from rest and returns economy of 53.3mpg. CO2 emissions of 124g/km mean a £110 road-tax bill at current rates, meanwhile. It’s a significant improvement, so while the 1.4-litre is more expensive, it should pay for the difference in only two years of driving.

If you want a faster model, there are two high-performance engines: a 2.0-litre with 247bhp and front-wheel drive, taking 7.5 seconds to cover the benchmark sprint, while a 2.8-litre V6 is fitted to the VXR Supersport model, which makes 321bhp, but unsurprisingly is also by far the most expensive Insignia to buy and run.

The vast majority of Insignias are diesels and they’re the best bet for lower running costs and getting the best return when selling. There are two engines: a 1.6-litre with 134bhp or a 2.0-litre CDTi with 168bhp. The former isn’t just smaller, it’s also a much newer design, so boasts running costs of 74.3mpg and CO2 emissions as low as 109g/km, putting it in the low 19% Benefit-in-Kind (BiK) company-car bracket. Road tax is free if registered before April 2017. 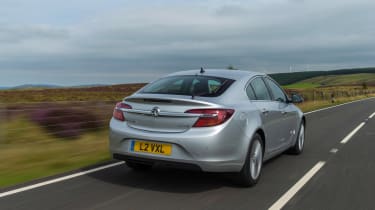 While the 1.6-litre can reach 62mph in 10.9 seconds, the 2.0-litre takes one-and-a-half seconds less, returns up to 65.7mpg and BiK goes up to as little as 22%, depending on which trim level and alloy wheels you choose. For example, even the 1.6-litre finds itself with 21% BiK if you choose a sporty SRi trim.

Vauxhall has clearly designed the Insignia to be as comfortable as possible, which is no bad thing. It does mean the Insignia is less confidence-inspiring on a challenging road than the Mazda6 or Ford Mondeo, but its softer suspension and refinement pay dividends on the motorway. While ecoFLEX models offer the best economy, it’s worth noting they have lower and stiffer suspension for better aerodynamics, which means they don’t always deal with bumps as well. Vauxhall’s optional FlexRide system costs around £800 and lets you choose between three settings of ride stiffness for relaxed or sportier driving.

Hop inside and the Insignia has the interior you’d probably expect, with comfortable seats, everything logically laid-out, but little to surprise or delight. There’s certainly plenty of space, even for taller drivers, or adults sat in the back – although the Insignia’s curved roof does make rear headroom a bit tight. The boot measures 530 litres, which will be more than enough for most situations, but it’s a shame the rear seats don’t fold very flat, making it trickier to load long items.

With the number of trim levels almost in the double digits, the amount of choice Vauxhall offers can be somewhat baffling, but there are some highlights in the range to concentrate on. The entry-level Design grade is actually pretty well equipped, but extra convenience features like automatic lights and wipers and rear electric windows are fitted with the SE trim.

SRi trim has proved popular thanks to its far sportier looks, with tweaked front and rear bumpers, lower suspension and smart alloy wheels, backed up with sports front seats. The effect is amplified with the SRi VX-Line, which takes styling cues from the high-performance VXR model, but is even available with the thrifty 1.6-litre diesel engine. If you want luxury instead, the Elite Nav grade prioritises comfort and convenience.

The Insignia is known for having some reliability niggles, as evidenced by coming 136th out of 150 cars in our 2016 Driver Power customer satisfaction survey. It should prove safe, however, receiving a five-star safety rating from independent crash-testers Euro NCAP.