The Vauxhall Insignia is a great long-distance cruiser

The latest Vauxhall Insignia is an incredibly comfortable car that’ll eat up long distances with ease, which is why it’s highly favoured by company fleet buyers. Recent tweaks made to the suspension filter out the biggest bumps to deliver a comfortable ride, while the engine is quiet and wind noise is low. In short, the Vauxhall Insignia can't be faulted for its cruising capability, however the economical ecoFLEX models have stiffer suspension which make the ride firmer.

Despite boasting plenty of grip, the Vauxhall Insignia doesn't come anywhere close to the Ford Mondeo or Mazda6 for driver thrills. There’s not much in the way of feedback through the steering wheel and the payoff for that comfortable ride is a soft feel in corners. The Vauxhall suffers more body lean than the Ford and its suspension is easily unsettled by mid-corner bumps.

In terms of engines, the Insignia 2.0-litre CDTi diesel ecoFLEX is seriously impressive and efficient, while the 168mph VXR Supersport is one of the fastest cars on sale in the UK in its price bracket. It takes 5.6 seconds to sprint from 0-62mph and gets a special ‘HiPerStrut’ front suspension system to improve grip.

There are four petrol engines to choose from in the Insignia, with one of those being reserved exclusively for the flagship performance version that accounts for a small percentage of sales. 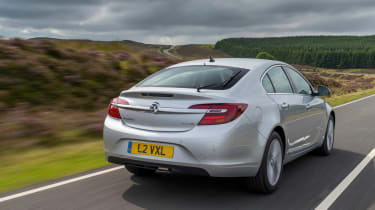 Of the three more realistic choices, the 1.4-litre is the easiest to recommend. Although the 1.8-litre model is marginally cheaper to buy, it’s not hugely fuel efficient. The turbocharged 2.0-litre engine, meanwhile, has brisk performance, but relatively low fuel economy, and high CO2 emissions mean it’s an expensive car to run, even if it gets the Insignia from 0-62mph in 7.5 seconds.

If the 2.0-litre petrol engine isn’t punchy enough for you, then you’ll be happy to know there’s a mighty 321bhp engine available in the Insignia VXR Supersport, which we’ve reviewed separately. As you’d expect, running costs are very high for this model, although it’s worth pointing out that no similarly priced car is as fast and practical.

For most Vauxhall Insignia buyers, the 2.0-litre CDTi diesel engine will be the go-to choice. It can return over 60mpg and takes 9.4 seconds to go from 0-62mph. The Insignia is also treated to Vauxhall's latest 1.6-litre 'Whisper' diesel engine. A 10.9-second 0-62mph time won't set anyone's hair alight, but it's a decent enough performer. Its top speed is 130mph and it’ll provide the best blend of performance and economy for most drivers. Yet despite its 'Whisper' name, it's actually quite loud at idle and sounds gruff when you put your foot down.