Vauxhall has a large dealer network across the length and breadth of the UK, so you should never be too far from help if your car needs it. The interior has a very upmarket look and feel, though the Insignia didn’t perform brilliantly in our recent satisfaction survey.

Overall build quality appears to be pretty solid, with the interior in particular feeling well made, using good-quality materials. The upmarket feel is enhanced on higher-spec cars, which come with plusher upholstery than entry-level versions.

The Insignia didn’t do brilliantly in our 2016 Driver Power customer satisfaction survey, ranking 136th out of the top 150 cars on sale and receiving an 85% satisfaction score. Vauxhall released a pretty big update for the whole Insignia range in late 2013, which (among other things) brought slight changes to the exterior styling, a revised centre-console and tweaks to the available engines. 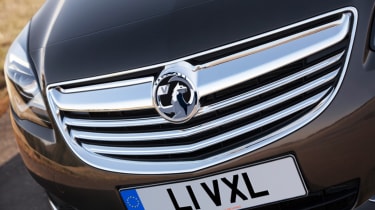 However, it’s worth pointing out that the Insignia hasn’t been tested by Euro NCAP since 2009, so the five-star award given to the car then doesn’t mean quite the same as the identical rating given to the BMW 3 Series in 2012.

Vauxhall also offers a raft of advanced safety kit on the options list, including a rear-view camera, plus a park-and-go technology pack with blind-spot and rear-traffic alerts.