Order the Vauxhall Mokka X with a 1.6-litre diesel engine for the lowest running costs

The Vauxhall Mokka X has benefitted from a few economy improvements that make it cheaper to run than the outgoing Mokka, but it’s still not quite as frugal as some rivals such as the Renault Captur.

The 1.4-litre petrol engine returns 39.2mpg and emits 147g/km of CO2, putting it in high percentage bracket for Benefit-in-Kind (BiK) tax. This will make it more expensive to run than petrol versions of the Renault Captur and Citroen C3 Aircross, which offer emissions of around 120g/km.

Adding four-wheel drive to this engine dents economy by a couple of MPG and brings BiK up again, while the 1.4-litre petrol engine with an automatic gearbox returns 37.2mpg. 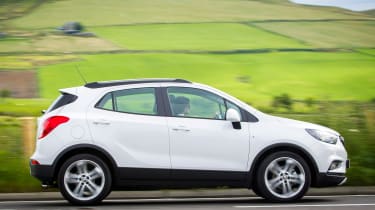 The Mokka X’s diesel engine is more economical, with the 1.6-litre Ecotec engine returning 50.4mpg and rated at the same BiK band as the front-wheel-drive petrol cars thanks to CO2 emissions of 127g/km. You can no longer choose four-wheel-drive or the automatic gearbox with the Mokka X's diesel engine.

These economy figures are far from class-leading for an SUV crossover, so if low fuel bills or company-car tax obligations are an absolute priority, rivals including the Renault Captur, Kia Niro and Citroen C3 Aircross will offer lower bills.

With insurance groups ranging from 13 to 16 (out of 50) getting coverage for a Mokka X shouldn’t be unduly expensive. These groupings are roughly on a par with rivals.

Vauxhall’s three-year/60,000-mile warranty is average for the industry, although many carmakers (including Renault) offer longer policies.

The Mokka X needs servicing annually or every 20,000 miles, whichever comes first. Vauxhall offers a prepayment package to make budgeting for maintenance easy, and this costs around £20 a month, including servicing and roadside assistance for three years, along with the first MOT.