"Few cars can match the Volkswagen Golf GTI cabriolet for its blend of desirability, practicality and top-down thrills."

What’s better than enjoying the terrific performance offered by the Volkswagen Golf GTI? Having the top down and the wind roaring through your hair, that’s what. Well, maybe. You do lose some performance in the Volkswagen Golf GTI cabriolet, but it still manages to combine the standard car's peppy performance with the cabriolet's slick folding fabric roof. The Golf cabriolet was CarBuyer's Best Convertible for 2013, so the range-topping GTI is based on a winner. Offering performance on par with the MINI JCW Convertible, the GTI offers plenty of power and enough space for four adults to fit in relative comfort – though those in the rear might feel a bit blown away when travelling with the roof down. Interior quality is excellent and despite the smaller boot, it retains the same dimensions as the standard car and it is a practical soft-top when compared with the MINI or the Mazda MX-5.

The 2.0-litre TSI petrol engine fitted in the GTI cabriolet returns 37.2mpg and emits 177g/km of CO2 with the six-speed manual gearbox. Opt for the DSG automatic gearbox and those figures are a little worse, returning 36.7mpg and 180g/km. That may look expensive at first glance (the standard 1.6-litre TDI diesel will return 64.5mpg and emit 117g/km), but if you consider the performance you get and the fact that the GTI cabriolet weighs an extra 138kg, it is actually pretty good. Both versions are in road tax band I, while servicing costs should be as manageable as it as any other VW model.

You get the exact same 207bhp 2.0-litre TSI petrol engine in the GTI cabriolet found as you do in the fixed-roof GTI hatchback. That means that performance is inevitably reduced by the extra weight of the folding-roof mechanism and the absolutely essential extra body strengthening required to make the car safe. It can still accelerate from 0-62mph in a decent 7.3 seconds and VW have made sure that the engine even sounds great. You get an excellent driving position, with well weighted controls that provide a very rewarding drive. The GTI cabriolet feels well suited to almost any type of journey, and no where near as manic as something like the MINI JCW convertible. That said, it still provides more than enough excitement on a twisty UK road.

For a sporty convertible, comfort levels are high and quality is great

You wouldn’t expect anything but sports suspension in a VW Golf GTI, so predictably, the GTI cabriolet has much firmer ride than the standard car. However, it is still perfectly comfortable enough for daily use and is quiet enough when pootling around town. Inside, the seats are very comfy and supportive, and, of course, covered in the same traditional red-and-black tartan material from GTI’s of old. Overall, the interior lives to Volkswagen’s reputation for class-leading quality, feeling both upmarket and sporty. You do get a small amount of wind noise when you’re driving at higher speeds on the motorway, but then again, you’re paying for the wind-in-you-hair thrills that only a convertible can offer.

The boot is small but buyers may not be put off

Convertibles aren’t often particularly practical, especially as that roof has to fold away somewhere – usually in the boot. Not so the Golf cabriolet, where is folds on top of the boot, leaving the respectable 250 litres of boot space intact. Folding electrically, the roof takes 11.5 seconds to close and 9.5 seconds to open, while the standard-fit split rear seats fold flat, making it much easier to carry longer items. Even with the roof there’s a reasonable amount of room, but the lack or back doors does making getting into the rear particularly tricky for taller passengers, who will also feel a bit out in the open when the roof is down. Any wind buffeting is reduced dramatically by fitting the wind deflector, but that fits over the back seats like in the standard Golf cabriolet – effectively turning the GTI cabriolet into a two-seater. That’s a quite a trade off, though storage is decent inside the cabin, with both the glovebox and door bins a useful size.

Given Volkswagen’s superb reputation for quality and reliability, it’s surprising to find the brand only placing 16th in the 2013 Driver Power customer satisfaction survey. But VW is not one for complacency, having already climbed back up two places from its 2012 ranks of 18th. In case you start to worry about the lustre coming off VW’s sparkle, its worth noting that the previous-generation Golf on which the GTI cabriolet is based, actually ranked 16th (coincidentally) in the list of top 100 cars. Naysayers could point towards the fact that the Golf previously finished in the top 10, but that’s nitpicking – especially as VW offers a decent three-year/60,000-mile warranty to offer peace of mind. You can expect the cabriolet to be dependable and safe, with a build quality as high as you’d expect from any VW. There aren’t any visible roll hoops, but that’s because the cabriolet is fitted with a hidden pop-up safety system that is activated if the car detects the danger of a rollover. Electronic stability control and anti-skid control are also fitted as standard, plus you get front, side head/thorax and driver's knee airbags. It doesn’t have a Euro NCAP crash safety rating, but the Golf hatchback managed to secure the maximum five stars.

The GTI cabriolet isn't cheap but used prices are high

You’re going to end up paying at least a few thousand pounds more for the cabriolet than the standard Golf GTI hatchback, which is pretty hefty premium given the lack of practicality and increased running costs. However, resale values for VWs on the used car market are stronger than for most other brands, so you will definitely get a large chunk of your money returned to you when the time comes to sell. Plus, the GTI is well equipped, coming fitted with 18-inch alloy wheels, a leather sports steering wheel, tartan cloth seats, cruise control and parking sensors as standard equipment. 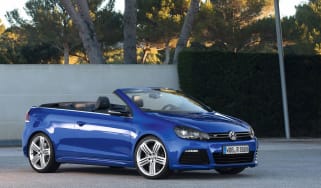 The Volkswagen Golf R Cabriolet now costs £33,170 – £5,600 less than before
Skip to ContentSkip to Footer