Golf resale values are generally very strong and given its relative scarcity, the Volkswagen Golf R should be a sound investment

In performance-car terms, the Volkswagen Golf R’s engine isn’t that big, relying on turbocharging rather than sheer size. This means it manages to be powerful as well as frugal. It certainly shames its 3.2-litre, V6-engined predecessor, while managing to look fairly economical even when compared to less performance-orientated petrol-engined cars.

Golf R insurance costs are also quite reasonable, at least for an average-risk driver. Volkswagen servicing is a little dearer than for a Vauxhall or other mainstream brand, however. The R was about 17% more expensive to buy than the already brilliant Golf GTI, so you need to be sure that you will regularly use its extra performance. Golf resale values are generally very strong, and given its relative scarcity, the R should be no different.

Whether you pick three or five doors makes no difference to the Golf R’s environmental credentials, but the choice of gearbox does. The DSG automatic is the more economical of the two options, enabling 40.4mpg and emitting 163g/km of CO2. The six-speed manual option actually increases the CO2 figure to 180g/km and reduces fuel economy to 37.7mpg.

Road tax will be £145 a year for all Golf Rs unless enough options were added to take the price of the car over £40,000. In that case, the car will incur a £320 surcharge in years two to six of its life, bringing annual tax bills during that period to £465. 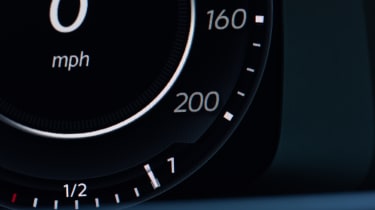 The Golf R’s closest rival is the the Audi S3, and thanks to its similar 2.0-litre turbocharged engine, it achieves virtually the same fuel consumption and CO2 emissions figures as the Golf R. The BMW M135i can return up to 47.1mpg and emits up to 155g/km of CO2. For these reasons, the Golf makes a strong case as a performance car for both private and company-car drivers.

The Golf R falls into group 29, compared to group 36 for the Audi S3. Of course, your individual risk profile is a key factor in calculating your annual premium, but so too is the insurance group your car falls into. The R’s case certainly looks stronger on paper than its rivals’. In fact, it’s in the same insurance group as the less powerful Golf GTI.

The Golf R is covered by Volkswagen’s standard three-year/60,000-mile warranty. Mileage is unlimited in the first two years, but capped at 60,000 miles in year three. Extended cover of up to five years or 90,000 miles was available from VW. In contrast, BMW offers a three-year/unlimited mileage warranty.

Volkswagen servicing costs are a little higher than those of less prestigious brands, but cheaper than for upmarket manufacturers such as Audi, BMW and Mercedes. VW offers a range of servicing plans for its models and your dealer should be pleased to discuss the best package for you.