The Volkswagen Scirocco is surprisingly spacious and scores comparatively well if considered as a coupe, as such cars are not usually sold for their convenience. However, there are a handful of niggling problems with its practicality and the way the boot works, which you wouldn’t expect on what is really a hatchback.

Visibility is a definite weak point – you sit low in the Scirocco so you don’t get a great view of the road. Also, the front windscreen pillars are thick and can create a bit of a blind spot. You don’t get a very good view through the narrow rear windscreen, either.

The Scirocco is one of the most spacious coupes you can buy. Although the back seat is strictly for two people, it's nowhere near as cramped as the back of a Peugeot RCZ or Audi TT, and while the low roof makes access tricky it's still easier than in a lot of coupes. Getting comfortable in the front seats should be just as easy as in the VW Golf, despite the lower seating position. 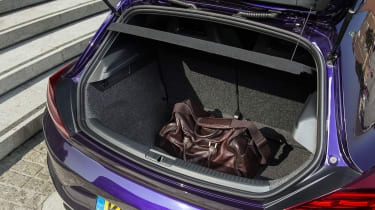 Storage spaces are plentiful in the Scirocco, including a good-sized glovebox, twin cup-holders and large door bins. There’s also a storage area under the central armrest, but it’s pretty tiny and best suited to loose change and pass cards.

Compared to the Golf’s 380 litres, the Scirocco’s 312-litre boot capacity doesn’t seem too bad for a coupe – and that expands to 1,200 litres with the rear seats folded down.

The seats also split in half and fold so you can carry extra luggage plus a second passenger, plus Volkswagen saw reason and started to fit an external boot handle during 2014 – earlier cars went without.

On the downside, the tyre repair kit takes up space, while getting luggage in and out can be tricky, particularly heavy or bulky items, as there’s a high boot lip to negotiate and that split rear seat doesn’t fold completely flat. None of these issues should plague a car fitted with a hatchback.