Around 75% of Volkswagen Scirocco models on the road are diesel-powered and we reckon the less expensive 148bhp 2.0-litre TDI is the pick of the bunch, as it offers the best blend of performance, economy and value. There is a more powerful 182bhp diesel, but if you want even more performance you’ll need to look at one of the 2.0-litre TSI petrols. All models offer a comfortable ride, even the R-Line with its huge 19-inch alloy wheels.

The basic Scirocco falls behind some of its rivals for driver enjoyment and even lacks polish compared to the normal VW Golf. However, it corners well and feels stable at speed. For maximum driving enjoyment, looks for models with the optional Dynamic Chassis Control system. This allows you to set the car up to your taste using three settings; Comfort, Normal and Sport. Sport mode stiffens the suspension and adds weight to the steering, for more composed and rewarding fast cornering. All Sciroccos come with a six-speed manual gearbox as standard, but the fast-shifting DSG twin-clutch automatic was an option on most models. 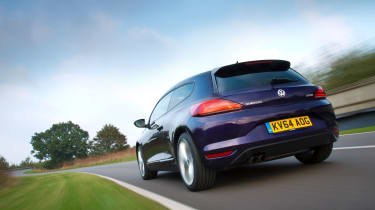 The 1.4-litre petrol TSI engine is fairly cheap to run, but its 0-62mph time of 9.3 seconds isn’t particularly quick for a car that's supposed to be sporty. It does have good mid-range acceleration, though, while the six-speed manual gearbox is nice to use and the engine remains smooth at cruising speed.

The 178bhp 2.0-litre TSI drops the 0-62mph time to 7.4 seconds, while the 217bhp GTS version lowers it again to 6.5 seconds and of the petrol options, this is version we'd recommend if you can afford it if you're looking for a genuinely quick car.

Need even more performance? The fastest model of all is the Volkswagen Scirocco R, which gets a 276bhp 2.0-litre engine that can take the car from 0-62mph in just 5.5 seconds. We’ve reviewed this model separately.

Both Scirocco diesel engines are strong. Even the 148bhp version gets the car from 0-62mph in 8.6 seconds, while the 182bhp engine does the same in 7.5 seconds. While the latter makes a good choice for performance, the less powerful engine is our pick of the range thanks to its lower price and running costs.