One of the best MPVs to drive, the Volkswagen Sharan combines powerful engines with agile and responsive handling

The VW Sharan is based on the same underpinnings as several other models in the Volkswagen range, so although it’s a large, tall car with seating for seven, it feels lighter and more agile than you might expect. The steering has a reassuring weight to it and there isn’t an excessive amount of body when you go around corners. As with other VWs, the Sharan boasts a strong range of efficient and responsive petrol and diesel engines.

Sharan buyers have a choice of two 2.0-litre TDI diesel engines – one with 148bhp and one with 175bhp. The former is our favourite, as it offers a good balance between the performance you need to haul a full carload of people and luggage around, and the efficiency you want to keep your running costs down. It’ll do 0-62mph in 10.3 seconds and hit a top speed of 124mph. 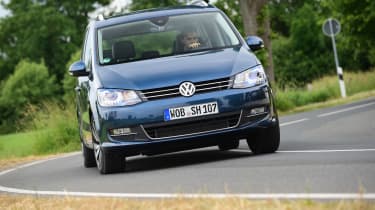 Moving up to the 175bhp version will increase you running costs slightly, but the 0-62mph time improves to 9.3 seconds. This engine is only offered with a DSG automatic gearbox and not available on the entry-level trim level.

The petrol range consists of a single engine – a 1.4-litre TSI with 148bhp. We think this engine really punches above its weight and is a great match for the Sharan, taking it from 0-62mph in 9.9 seconds.