The 148bhp diesel returns fuel-efficiency figures similar to the old 113bhp model, at 42.8-44.8mpg and CO2 emissions of 166-174g/km. We think the 148bhp diesel is a better all-round bet than the petrol with the same power output – especially in a car as big as the Sharan.

The most powerful diesel is the 175bhp 2.0-litre engine, which records 39.8-40.9mpg and has CO2 emissions of 182-186g/km. It’s a good choice if you’re planning to tow a caravan with your Sharan – or simply like driving fast – but it’s rather expensive and seems like overkill for family motoring. This engine is only available with a six-speed DSG automatic gearbox. 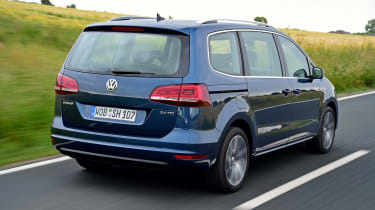 Don’t discount the 1.4-litre petrol, though – especially if your annual mileage is low. Like the diesels, the 1.4-litre TSI employs VW’s BlueMotion Technology – a range of fuel-saving measures, including a stop-start system that shuts the engine off when you’re stopped in traffic. This petrol engine is economical with economy of 34.3-37.2mpg possible when equipped with a six-speed manual gearbox with CO2 emissions of 172-186g/km. Pick the six-speed DSG automatic gearbox, though, and the economy falls to 31.7-34.4mpg with 186-201g/km of CO2. It's worth bearing in mind that the lower purchase price takes the sting out of the worse fuel economy.

The VW Sharan ranges from insurance group 19 for the least powerful model to 25 for the most powerful. This puts it broadly in line with its sister model the SEAT Alhambra when it comes to insurance costs, as well as rivals like the Ford Galaxy.

All new VWs sold in the UK are covered for unlimited mileage within the first two years of ownership. And as long as you don’t exceed 60,000 miles, that factory warranty cover continues for a third year. This is about average for the industry, although it’s worth noting that that Kia – which offers the seven-seater Sorento SUV – covers its cars for seven years or 100,000 miles.