The D4 diesel is a good all-rounder, with punchy performance leaving enough in reserve for towing duties

With pleasingly weighted steering, plenty of composure in corners and decent ride comfort, the Volvo XC40 should be more than capable enough to satisfy families. It may lack the engaging nature and steering feel of the Jaguar E-Pace and Mazda CX-5 but it's ahead of plenty of other rivals in driving terms; the DS 7 Crossback to name but one.

It’s a model you’ll happily waft around in with the minimum of fuss, and the D4 engine has plenty of power to make the XC40 feel quite spritely. With an eight-speed automatic gearbox fitted, you're best leaving it to its own devices, especially as the odd left-for-up, right-for-down action of the shifter in manual mode is very unsatisfying. 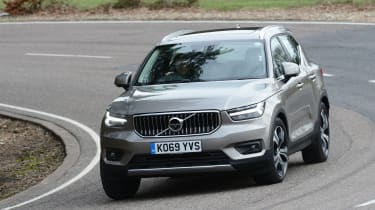 The most affordable D3 diesel has 148bhp, matching many rivals, including the Audi Q3 2.0-litre 35 TDI. It comes with the option of front or four-wheel drive and while a six-speed manual gearbox is standard, you can upgrade to the eight-speed automatic. It takes between 9.9 and 10.4 seconds to reach 62mph from a standstill but feels sprightlier than the figures suggest once on the move.

Next there’s the 188bhp D4, which is also a 2.0-litre diesel, but tuned differently to provide its extra power. The 0-62mph dash is dispatched in a respectable 7.9 seconds, while its electronically limited top speed of 112mph means cruising at 70mph should be fairly effortless. Despite its more sporting pretensions, these figures put the Volvo ahead of the Jaguar E-Pace D180, which takes half a second longer to reach 62mph. 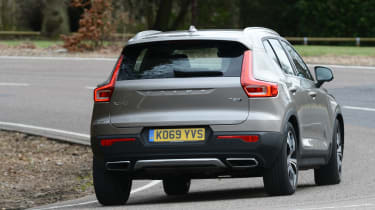 There are four petrol models on offer: the 247bhp B5 and 194bhp B4 both get mild-hybrid assistance from a starter-generator and 48-volt battery, and are only available only with an eight-speed automatic gearbox, while four-wheel drive is standard on the B5 and optional on the B4. The 1.5-litre T3, which is now available with a choice of manual or automatic gearboxes. In early 2020, Volvo added a detuned version of the T3, badged as the T2, with 127bhp and a 0-62mph time of 10.9 seconds; it only comes with a manual gearbox and front-wheel drive. The 1.5-litre engine is based on the 2.0-litre four-cylinder engine, but with one cylinder chopped off. This engine also forms the basis of the T5 Recharge plug-in hybrid.

We think it works better with an electric motor to give it a torque boost because on its own the three-cylinder engine lacks punch. This is exacerbated by very tall gears, which make for relaxing cruising, but can require changing into fourth on the motorway to pass slower traffic.

The T3 has 160bhp and takes 9.3 seconds to get from 0-62mph (9.6 with the automatic), with an electronically limited top speed of 112mph. It’s solely available with front-wheel drive and comes as standard with a six-speed manual gearbox that feels reasonably precise, but not as slick as the CX-5’s gearbox. It also has an awkward square shifter. The 2.0-litre B4 with front-wheel drive is rather more spritely, taking 8.4 seconds, and would be our pick of the petrol range. The range-topping four-wheel-drive B5, meanwhile, remains the fastest XC40 you can buy, with a 0-62mph time of 6.4 seconds – as quick as some hot hatchbacks.

The Volvo XC40 Recharge T5 is a plug-in hybrid model consisting of the T3’s 1.5-litre petrol engine, an electric motor and a 10.7kWh battery. Together they produce a maximum of 258bhp and propel the car from 0-62mph in 7.3 seconds - a little longer than the B5 petrol but still quite rapid. You can tell the car which power source to use via a set of driving modes, or leave it to juggle between them. Do this and the switch between the two is almost unnoticeable, which is helped by the standard-fit seven-speed automatic gearbox.

The electric motor takes a lot of pressure off the 1.5-litre petrol, so most of the time it feels like a larger engine with impressive refinement, only sounding harsh at high revs. The main negative is a slightly unnatural feel to the braking thanks to the energy harvesting. The extra weight of the battery pack can also make the ride feel slightly less plush on occasion.

The XC40 Recharge P8 is fitted with two electric motors, one for each axle, giving it a total of 402bhp. No, that's not a typo; the small crossover has more power than many past supercars. Acceleration from 0-62mph takes just 4.9 seconds, while its top speed is limited to 112mph.