Unlike many crossovers, the XC40 has shunned a coupe-like roofline for a more conventional boxy shape, resulting in plenty of space for passengers. Luggage space isn’t class-leading, but it should suffice for most people and is neatly thought-out. 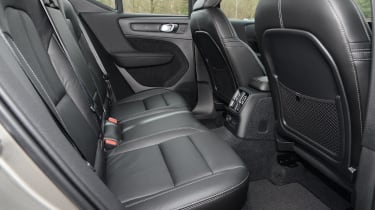 The XC40 isn’t a particularly big SUV, but pushing the wheels out to each corner of the car means interior space is quite impressive. Rear legroom and headroom are both more than adequate, and unlike many rivals, the inclusion of a panoramic sunroof doesn’t see your follicles flattened by a lower roof.

Like the Jaguar E-Pace, there’s plenty of room inside, with four six-foot tall adults travelling together, but a fifth might be stretching it, especially because a raised transmission tunnel robs the middle occupant of space to put their feet. 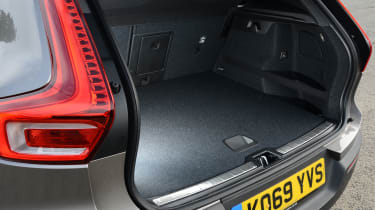 With 460 litres of boot space on offer, the XC40 sits between the Audi Q3 (427 litres) and BMW X1 (505 litres) in the luggage wars, while the sporty Jaguar E-Pace is actually quite a bit bigger, providing 577 litres. Unlike some plug-in hybrids, the T5 Recharge plug-in hybrid doesn’t sacrifice any boot space to accommodate the battery because it's fitted under the floor of the cabin. The same is true for the Recharge P8, with a 452-litre boot capacity.

Sheer volume isn’t the only important factor, though: the XC40’s boot is nice and flat, with no lip to heave items over. This smooth loading space remains snag free even if you fold down the back seats, boosting space to a maximum of 1,336 litres.

Add a Convenience Pack and the boot floor can fold to divvy up the space and provide more nooks and crannies to secure your shopping without it turning into a smoothie on the way home. There are even hinges that turn into hooks when you use them as dividers, providing even more places to secure your items.