Although its boot is slightly smaller than class average, the Volvo XC60 T8 hybrid is comfortable and spacious

While we haven’t been hugely generous with our scoring of the Volvo XC60 T8 Twin Engine hybrid’s practicality, that’s not an indication it’s pokey inside, but more a reflection that rivals are slightly more spacious and practical. 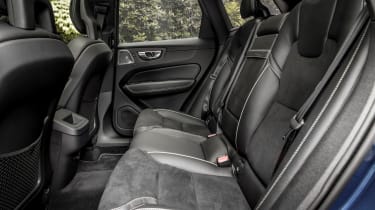 Volvo is known for making comfortable seats and the XC60’s are no exception. They somehow manage to be both soft and supportive and while the R-Design model gets bigger side bolsters, these don’t impact on comfort in any negative way. The driving position is also spot-on, while the two large sliding compartment covers on the central console hide cupholders and somewhere to store wallets and phones.

Parents with small children should be aware the XC60 T8’s rear doors don’t open as wide as they might, making access for child seats trickier than it needs to be. This won’t be much of a problem if your children are older and their seats tend to be left in the car, but if you’ve a baby whose seat gets lifted in and out with them in it on a regular basis, check you’re happy with the access on offer.

At 505 litres, the XC60 T8’s boot is large enough, but it’s down roughly 10% on rivals. The rear seats don’t slide, either, so there’s no option to increase luggage space if you have short-legged passengers. For background colour, the Audi Q5 offers this feature and moving its back seats forwards increases its cargo capacity from 550 to 610 litres. 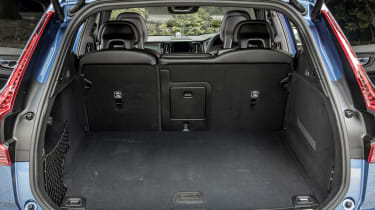 Also slightly disappointing is the fact the XC60’s seats split 60:40 rather than individually, limiting its versatility slightly. There’s no under-floor storage in the boot either, as the charging cable and assorted mechanical gubbins rest here. These may be minor niggles, but practicality counts when it comes to SUVs and these small shortcomings are absent from some of the XC60’s rivals.

Although some hybrids aren’t recommended for towing, the XC60 T8 is officially rated as being able to tow a braked trailer weighing 2,000kg. Note, as ever, that recommendations state you shouldn’t tow more than 85% of a car’s kerbweight, effectively limiting the T8’s towing ability to 1,700kg (although check your individual car’s kerbweight).